We stayed in Trebeurden until 24/04 waiting for favourable weather to get south of the Chanel de Four. Our passage to L'Aber Wrach took ten hours in poor visibility leaving with the tide at 0530. We did not get the N3 expected and in fact had to motor sail the whole way. We were pleased to have radar. 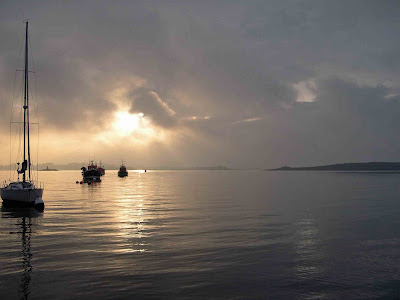 We picked up a mooring bouy in L'Aber Wrach which was very peaceful. Miggy laid a Langoustine pot but only managed to catch a tiny crab which looked very sorry for itself so she threw it back in the water. After a sound but short night's sleep we set off again at 0515 in the dark bound for Camaret.

Again we had limited visibility and no wind for our passage down the Chanel de Four but we did catch glimpses of the legendary lighthouses - Le Four, Grande Vinotiere and Pte St Mathieu - surrounded by their venemous rocks. As we reached the south of the Chanel and turned for the Rade de Brest yelps of glee from Miggy heralded the sight of a pod of around 12 Dolphins nearby. They stayed with us for about half an hour for which we felt honoured and considered to be a good omen. 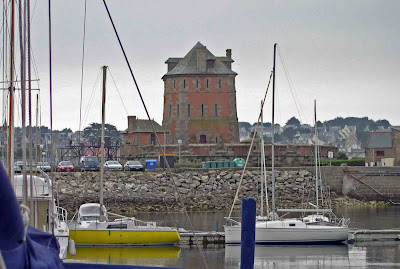 We are spending a quiet day in Camaret doing the laundry and household chores before leaving at a reasonable hour tomorrow 26/04 for the River Aulne where we will sail about 20 miles inland to Port Launay and Chateaulan.
Posted by Miggy and Neal at 14:43 8 comments: 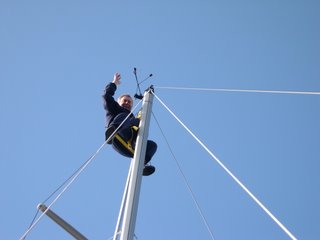 We had replaced the inadequate shackle to the main halyard in Cherbourg. When we hoisted the main in the Inner Rade the main fell down and the halyard disappeared down through the mast!! Fortunately the wind was on the nose all the way to St Peter Port and would have made sailing tedious particularly in a very lumpy sea off Cap La Hague.
Neal went up the mast on the genoa halyard in St Peter Port and fed a messenger down weighted with five of Miggy's Morrocan beads! We had wanted to splice the halyard to the shackle but the rope turned out to be Spectra and Miggy can't do that; As the only rigger on the Island was on holiday for ten days we tied a bowline and stitched the tail to the standing part. We saw our first Swallows flying north on passage. 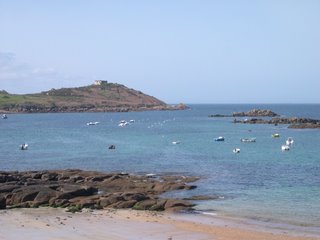 St Peter Port does not change and, as usual, we had an excellent welcome at the Guernsey Yacht Club.

It was of course Easter and we were able to provision at the market and before the shops shut for the holiday; We had an excellent sea bass for supper aboard on Good Friday. Saturday saw our wedding anniversary and Miggy gave Neal a great CD of Andrea Bocelli and we opened cards from UK.

We set sail for Perros Guirec despite a forecast of strong winds and fog which never arrived. We saw Arctic Terns flying south and had little birds rest on the boat with us. It rained most of the day; We arrived as the sill gate opened and switched to European Summer Time.

Easter Sunday we had Lindt chocolate rabbits brought from UK by Miggy and found shops open ashore. Perros was not as we remember it some twelve years ago and has gone up market. We climbed the hill to the town and a quaint church which, being Sunday, was not open to the public only those attending mass at 1030! 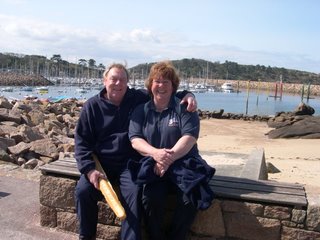 Perros is a little glitzy for us so we decided to leave after a day there and with the forecast of settled weather. On leaving Perros we anchored in the approches for breakfast of English bacon then sailed slowly west between the Granite Rose coast and Les Sept Iles. Yes the granite really is pink!

We anchored in the approaches to Trebeurden for a late lunch taken in the cockpit!! Miggy has not caught a single fish yet! Trebeurden appears a lazy place off season and there are no shops at Le Port. We have to walk to the village up the hill for bread and on to the town for this Cybercafe. There are beautiful walks and breathtaking views of keel swallowing rocks all around! Spring flowers and bird song abound and it is 16°C.

We are on our way

Having said fond farewells to friends and family and having eaten the last of the freezer content we set off for Cherbourg at 0600 on Thursday the 6th April. Despite the early frosty start kind friends Ted and Iris, Ken and Jackie, John and Annie and Richard and Celia came to see us off.

Miggy had a great chat on Radio Solent on the Wednesday morning and Julian Clegg continued to mention us and our weblog throughout his show. Next broadcast from Miggy is at 0645 on 23rd May on BBC Radio Solent 96.1 FM.

We had a near perfect sail to Cherbourg with a Force 3/4 on the beambut have been stuck here for a while due to strong winds; This has given us time to wind down, remember some of our french, taste the bread and wine and buy a local SIM card. Our telephone/text No. is +33633701093.

Looks good for St Peter Port tomorrow. We will post new stuff soon now that we have learnt to use Internet Cafes
Posted by Miggy and Neal at 09:00 1 comment:

The day has come 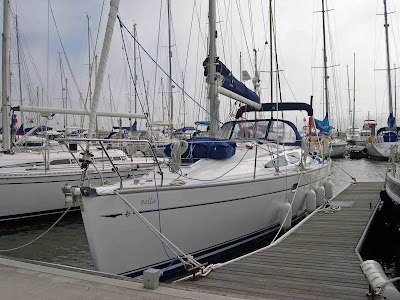 We are both extremely excited. Tomorrow at 0600 we finally depart after 12 years of planning. Miggy was on Radio Solent this morning telling Julian Clegg and the 'world' where we are going and about last minute preparations. Her next broadcast is at 0645 BST on the 23rd May - so listen in. 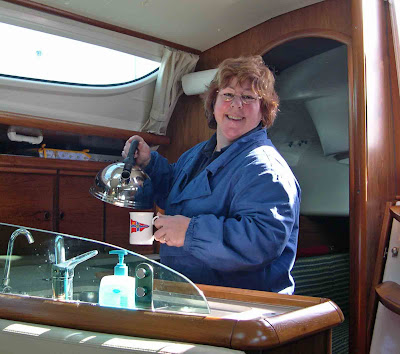 We have had our family to stay with us, take us out to lunch and otherwise say 'au revoir'. We keep telling them that we are within a half day flight of getting back to the UK and that we can communicate at any time by text, phone or email. It is sad however even to say 'au revoir'.
We had a great party on Friday evening last at the Royal Lymington Yacht Club where we invited 48 of our friends to celebrate Neal's 6oth birthday and toast our voyage. Kind words were said by many dear friends and very generous gifts were given which included loads of cash from family, a Navionics Platinum electronic chart, an MP3 player, a digital recorder and many other wonderful and useful items including, of course, a bottle of Bubbly. 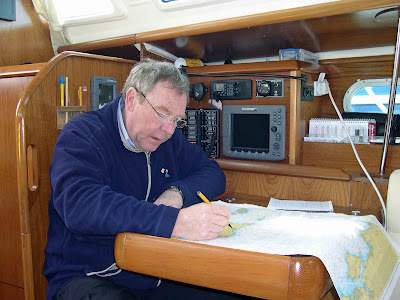 Thanks to all family and friends who have been so kind to us. Chef, Peter, cooked a superb dinner praised by the entire company present. Mark, John and the staff were all brilliant and we thank them sincerely for a great send off. 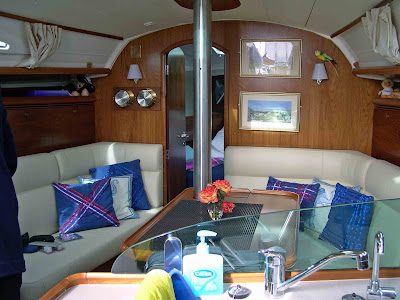 We are now about to load the final bits of gear on the yacht, take the hire car back and then clean the house ready for our visitors.
We will post our French mobile number on this site as soon as possible. In the meantime we wish you all well and look forward to seeing family and friends either on Bella in sunnier climes or back in UK early next year.
Posted by Miggy and Neal at 08:08 2 comments: