Our flight back to the UK necessitated a night in Tunis where it rained again. Our hotel bed mattresses were of straw or, perhaps, wood and our breakfast of bread and jam. What else do you expect for £8 a night each? Our chosen Restaurant Touristique (2 forks!!), the ‘Bella Italia’, turned out in fact to be a smoky, boisterous Muslim pub full of inebriated Tunisian men. The food from the limited menu on offer of bread and harissa vegetable starter and chicken and chips was good and the Magon 2005 wine was excellent. What is more it was extraordinarily cheap. The waiters, dressed in black waistcoats and bow ties were attentive and the clientele, although rowdy and many sheets to the wind, were very friendly to us. We had an unusual but very enjoyable evening.

Our short time in England overflowed with generous supper and party invitations from family and friends to such an extent that the number of times we eat at home could be counted on the fingers of one hand. We travelled, by car kindly lent to us by dear friends, to south east London to see Neal’s small family and to Gloucester, Guildford, Sherborne and Deal to spend time with Miggy’s somewhat extensive clan. It was very special to be present at Celia’s coming of age, our third niece to reach this milestone and gorgeous she looked too. 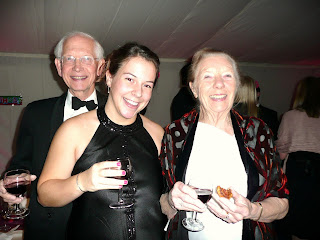 At 0645 on the first day of our stay those of you in the South may have heard Miggy on her BBC Radio Solent Julian Persons’ slot. Talking of Radio Solent at 0500 on Christmas Eve we got up to go to Radio Solent in Southampton for the Julian Clegg Show Christmas party. We were first up on air to talk about our exploits and for the remainder of our time at the studio we ate croissants, drank coffee and talked with other guests from a myriad of walks of life all of whom, like us, tell of their experiences on air as ‘Julian’s People’. In fact we felt frauds as it appeared we were the only couple who were on the programme by dint of enjoying ourselves. Everyone else seemed to be there because they helped others, represented a good cause, institution or charity or had knowledge or advice to impart to others. 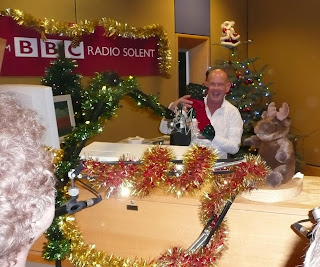 The build up to Christmas was wonderful and included the parties that are now, after so long, a very pleasant ritual and midnight mass at the parish church where we sang carols heartily. Christmas day was as it should be, relaxed and lunch taken after the Queen was splendid in all respects with a perfectly cooked organic bronze turkey for which we had to take out a mortgage, wonderful roast spuds and parsnips, sprouts off the stalk and stuffing balls and cocktail sausages and the best ever gravy made from the turkey juices and crushed vegetables that formed a trivet under the turkey during cooking (A la Jamie Oliver). All this and good wine, cheese and brandy made for an afternoon to remember.

First footing to Yarmouth, Isle of Wight, by sail with friends was just what the doctor ordered as was lunch at the ‘Kings Head’. 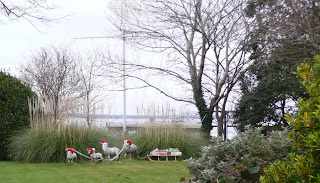 We were utterly stunned by the price of everything in the UK and we winced as we paid enormous sums for food and drink at the supermarket and cringed as we spent fortunes for chandlery to maintain and improve Bella.

Our travel back to Tunisia was straightforward and stress-free. National Express coaches have to be congratulated in bypassing a closed M3 during our trip to Heathrow and being only ten minutes late and the Tunisair flight was comfortable and included a cooked in-flight meal with wine. BA offer a sandwich so we are told.

Travel by the Metro, or modern tram, in Tunis is efficient and cheap. The trains are frequent and manage to slice their way through the congested streets of the Capital where we spent our first night back in Tunisia with the sole purpose of visiting the Bardo Museum the following day prior to returning to Monastir and ‘Bella’.

The ‘Bardo’ has been the National Museum for more than a hundred years having previously served as the winter palace of the Bey, or King, of Tunis. The buildings, constructed mainly during the mid nineteenth century, comprise some fine rooms of state with exquisitely painted or fret worked ceilings and magnificent wall tiling all very much reminiscent of the decoration carried out some eight centuries earlier at Granada’s ‘Alhambra’ and similar palaces in Andalucía . 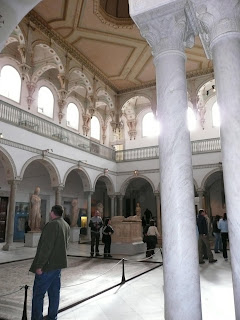 The collections exhibited at the Bardo range from the prehistory through the early history, and notably the Capsians from about 10,000BC, the Phoenicians from 1100BC, the Roman occupation from 146BC to 439AD, the Vandals and then the Muslims from 647AD to the current day.

The early history exhibits are interesting and include a pile of flints and bones, the ‘Hermaion of El Guettar’, considered to be one of the oldest ritual structures ever made by man, The Punic collection discovered mainly in Carthage and Kerkouane comprises statues, jewellery, coinage and other everyday artefacts. Perhaps the most famous relics of the Phoenicians are the collection of ‘Grimacing masks’ dating back to the 7th century BC. These masks were buried along with the deceased to ward off evil spirits. 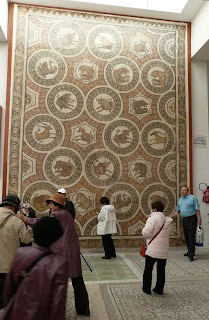 Despite the wealth and diversity of the material from previous periods of history it is the Roman and Paleo-Christian collection for which the Museum is most famous and in particular its vast and impressive collection of mosaics. Many of the mosaic floors are intact and the magnificence of the detail and colour of the work carried out so long ago is outstanding they resemble intricate tapestries or carpets. 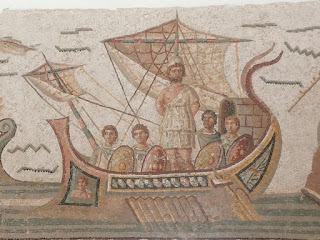 It is a tribute to the Roman craftsmen and the Tunisians, or perhaps the French, who uncovered, removed, restored and placed the collection in the Museum that these works of art have survived for the 2000 years or so since their creation. Whether or not the fact that these treasures have been removed from their natural locations such as Carthage, El Gem, Dougga and Thuburbo Majus, amongst others, is open to question but at least they are safe, protected and in one place convenient for us to view.

We managed to catch our train to Sousse by the skin of our teeth despite the metro’s best efforts to delay us and two and a half hours later we were stowing our luggage aboard ‘Bella’, a task that we all but completed before going to eat good Ojja and Pizza and drink cheap wine at ‘Lostania’. How nice to be back aboard a shipshape ‘Bella’, to be in a warm environment and to be back in the land of low prices after an exorbitantly expensive and expansive Christmas in England.
Posted by Miggy and Neal at 08:57 No comments: