The Circle is Closed

Today we stood on a hill a stone’s throw from the Algerian border overlooking Tabarka, our landfall in this Country over four months ago. The circle is thus closed having sailed the north and east coasts, explored the Sahara in the south, the central plains and now the northwest.
Our prime reason for this two day trip was to visit the ruins of the former Roman towns of Bulla Regia and Dougga. This Country is graced by a gallimaufry of remnants of this era but, alongside Speitla which we have already seen, these two sites are by far the most extensive and best preserved. 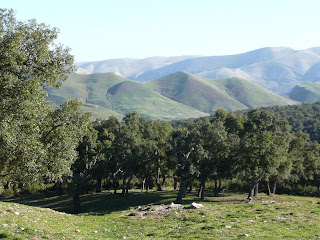 It was an unexpected bonus to discover the magnificent pine, cork oak and oleander covered hillsides of the Monts de la Medjerda and Monts de Tebersouk and the fecund plains of the valley of the Oued Medjerda, the former bread basket of Rome and now that of Tunisia. It was also a pleasure to see a multitude of wildlife including eagles and other birds of prey.
As we left behind the tacky resort towns of the littoral and the filth and squalor of the plains we entered a different world; a more ordered, clean and tidy world with fields and forests smelling sweetly of natural herbs: a world of surprising affluence and no litter. The terrain, the horticulture and the way of life are as that of southern Europe and in particular the Islands of Corsica and Sardinia. There are even sheep, goats and cows wandering the roads but not pigs of course.
Talking of pigs, our hotel for the night, a hunting lodge, offered roast wild boar on the supper menu which, by some Imams, is considered not to be pork and thus halal. All Muslims staying at the hotel, bar none, eat the pig meat with gusto showing yet again their penchant for the forbidden fruits!
The Roman remains of Bulla Regia pale to insignificance compared with the splendour of those at Dougga but they have the unique feature of underground living amongst the apparent former glory of the aboveground public edifices, the jewel of which is the theatre complete with its bear mosaic. 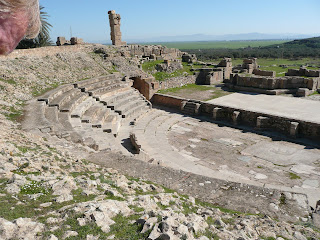 As far as we are aware, strangely, in this town alone, the Romans learnt from the Berber troglodytes that it is cool to live underground and built their homes with rooms below ground arranged around colonnaded atria open to the air. 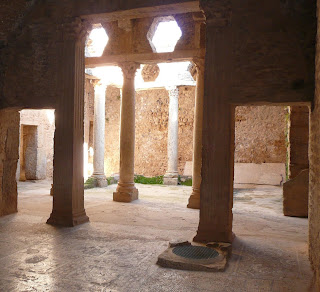 Their palaces and villas are adorned with fine mosaic floors, some of which remain in situ; the most intact and best preserved having been transported to the Bardo Museum in Tunis. Perhaps the finest example on site is in the ‘Maison d’Amphitrite’ where the mosaic of the Triumph of Venus depicts Venus borne by Tritons and attended by Amor, astride a dolphin, carrying her crown, mirror and jewel box.
Had we been a Romans we would have had our names down to live in Dougga as soon as the waiting list was published. Its setting is outstanding nestled into the slopes of the Monts de Tebersouk overlooking a fertile valley and the distant velvet green hills to the south. 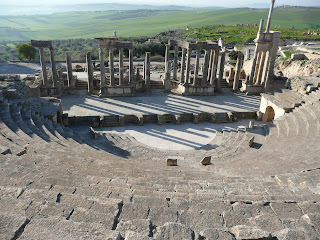 Neal reckons it would have been a pleasure to have acted on the colonnaded stage of the second century Theatre to an audience of 3,500 seated in the tiered auditorium seemingly rising to the gods. All he could muster, however, was one! 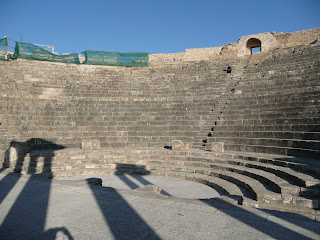 The Capitoline Temple faced by four monumental Corinthian pillars still bears in its pediment an understandably worn carving of the Emperor Antonius Pius entwined with an eagle. Three internal niches once housed the statues of the Gods, Juno, Jupiter and Minerva now displayed in the Bardo Museum. 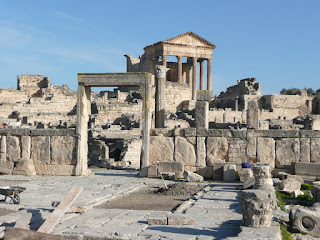 The Plaza of the Winds is of particular interest to us sailors as it contains carved in its paviours a compass recording the twelve Roman winds in the quadrants from which they blew. Although we are not yet fluent in the Roman language we recognised one or two of them!
Of the other numerous sites of interest are the Baths of Licinius, a vast complex of hot and cold rooms and gymnasia. 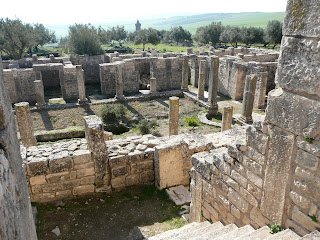 Also the House of the Trefoil, the brothel, complete with cubicles for the various goings on but minus its stone phallus advertisement directly next door the Baths of Cyclops with its twelve seater lavatory in a room off the entrance hall. The four S’s were thus well catered for! 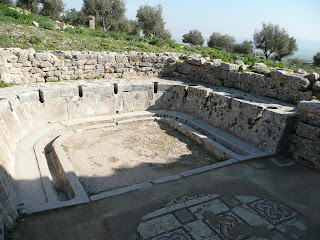 The roads in this part of the world are truly Roman and straight as a dye between one town and another except of course for the mountain passes. It was driving along one of these remarkable thoroughfares that we spied overhead the incredible sight of a sizeable flock of storks gently circling on a thermal. Their nests adorn pylons and buildings along the roadside but this appears to be about the southern limit for this fine bird. 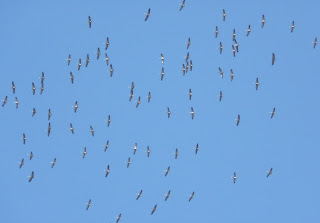 And then back to reality where, as soon as entering the Sousse region, the roads got worse and litter abounded. At least our floating home, albeit in a touristy town, is parked in a relatively clean and tranquil Marina somewhat apart from it all.
For those of you in the BBC Radio Solent area who are up and about at the unearthly hour of around 0630 GMT, Miggy is on air again on Thursday the 28th of February on 96.1FM.
Posted by Miggy and Neal at 14:39 No comments: