We set off on our travels again to explore a tiny part of this massive country including the Lake District, Konya, Cappadocia and the Eastern coast of the Mediterrean a trip of 2300 Km in 7 days. In this Episode, one of three, we explore two ancient cities, the Lakes and Konya.
Soon after leaving Finike we found ourselves climbing through the pine forests of the foothills of the Tarsus Mountains into fertile valleys at about 1200 metres with rugged mountain peaks of around 2000 and 3000 metres all around us. Wildlife in the form of cows, goats, sheep, red squirrels and storks, eagles, herons and ducks abounded as did root vegetables, grapevines and a myriad variety of fruit: amongst others pomegranates, apples, pears, plums, peaches, melons and citrus fruits.
Taking Cay (Tea) at Kizilkaya we were surrounded by local men playing dominoes and looking at us in our shorts quite quizzically and no wonder as it is a lot colder up here than on the coast. As a matter of fact the locals will be expecting snow soon. 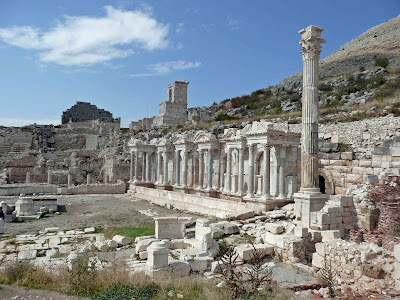 A short detour took us to the remains of the city of Sagalossos which reached the zenith of its prosperity in Imperial Roman Times. 'Cultural superstition' whereby settlements continue to be inhabited and expand throughout 'classical' antiquity thus obliterating older remains masks all but a very few of the remains of former inhabitation of the area from Pre Neolithic times (9000BC) through the Hittite, Luwian (2000-1500BC) and Hellenistic (300BC) dynasties to its incorporation into the Roman Empire. The remains of the Agoras (market squares and meeting places), Nymphaeum (ornate strructure housing fountains), Library and stone paved roads complete with cart tracks are quite well preserved. 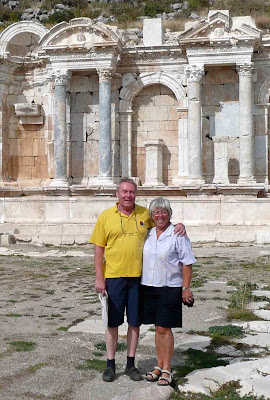 After a cheap and cheery doner kebab lunch in Aglasun onward through ski country; Davras Ski Centre is nearby, with the hillsides planted with Christmas trees by the million and in the valleys tall slender poplars reminiscent of Italy, to the heart of the vast Lake District of some 5000 square kilometres and to our destination for the night, Egirdir, on the southern shore of the lake of the same name. The mountains surrounding the lake rise to around 3000 metres present a stunning backdrop to the still waters of the lake ever changing colour from Turquoise to pastel green and all shades between. The small resort town of Egirdir has little to offer in itself but the place is clearly a popular place for walkers and wildlife enthusiasts and for exploring the S Paul's Trail. 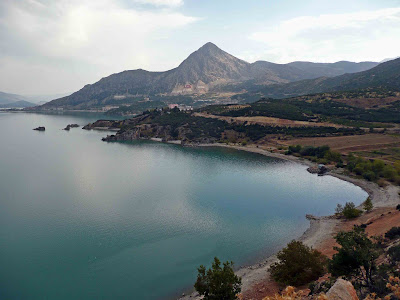 The smell of apple pervades the air as we travel through extensive orchards and stocks of the fruit piled by the roadside. Maize, melon, cabbage and corn also flourish among the poplar trees and tiled dwellings with their hanging strings of red chillies. Some 70 kms to the north of Egirdir close to the town of Yalvac, in which we got thoroughly lost, is situated Antiocheia-in-Pisida and the synagogue , replaced in the 3rd and 4th centuries with churches, where St Paul first preached to the Gentiles in 46AD, now a place of Christian pilgrimage.
Local tourist literature has it that, and I quote: 'In Palestine, the place of its birth, the new Christian faith was unable to make much progress and its adherents headed in the direction of Asia Minor now Anatolia instead where Christianity began to spread and organise itself. Four cities, Antioch, Ephesus, Tarsus and Antiocheia-in-Pisidia were targeted for this. St Paul undertook tree important missions to propagate the new faith in Anatolia. Chosing Antiocheia as his centre, it was here he proclaimed the new religion to all who would listen. It was from Antiocheia that Christianity began to radiate all over the world. At the time the city had living side by side devotees of oriental mysteries, Jews, idolators and pagans. Ther was also a class of well-off people for whom monotheism had a strong appeal. This was the setting in which St Paul found himself when he arrived to preach the new religion. When he first arrived at a new city he would sit at a loom and weave tent cloth not just to support himself but also as a way of meeting people with whom he strove to get to know and understand. He wove a web of love and friendship as he sat at his loom.' 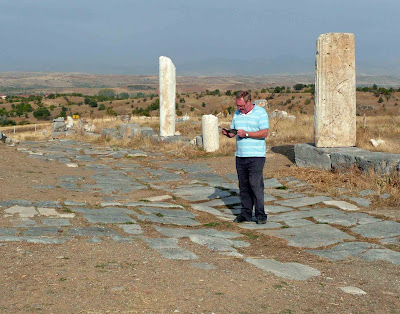 Scholars on these matters will know whether or not the above passage displays an element of local, if not regional, self interest but it is true to say however that, if the New Testament account is correct, Paul was here. Acts 13 tells us that he came from Paphos (Cyprus) by way of Perge on the Turkish Anatolian coast to Antiocheia-in-Pisidia and that on the Sabbath almost the whole city came together to hear him preach in the synagogue.
Leaving Antiocheia along the apple lined road boardering Lake Beysehir and passig three Hans (storage depots built circa 13th century for the benefit of merchants and caravans crossing Anatolia along the Roman-Byzantine road and to encourage trade) we plunged into the smog of Konya city. 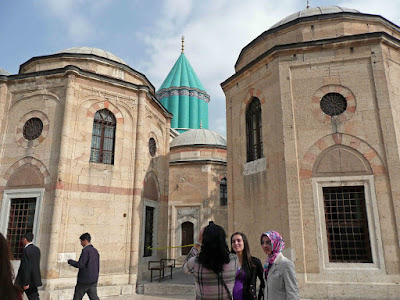 Known throughout Turkey for its pious inhabitants and strong Islamic leanings this ancient city had little to offer us. In fact we felt the people were insular and oppressed, if not suppressed, as they went about their daily business unlike the majority of the Turkish people we have met who are uninhibited, happy, friendly and hospitable. The 1220 Alaeddin Mosque, although Konya's largest and Turkey's most holy, was unimposing with its minaret no taller or elaborate nor its domes more grand thanothers we have seen in the smallest towns. The Muezzin, the chap who chants (or nowadays switches on the prerecording) the call to prayer five times a day that blasts from the tannoy on the mosque's minaret was decidedly less tuneful than most! 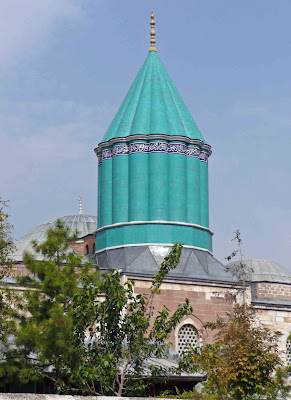 Our sole intrest in this city, the former capital of Turkey, was to visit the historic centre of the Mevlevi sect of Sufic nystics better known to us as the Whirling Dervishes. Far from being rabid zealots the Dervishes practice a highly tolerant, undogmatic creed that prizes poetic beauty, love and generosity. The 13th century turquoise domed sanctuary houses the tomb of their founder Afghan born Mevlana Celaladdin Rumi in a compound that includes the Dervishes' cells, their library and the hall in which they performed their whirling dance, the sema, which symbolises the sharing of God's love among earthly beings. Rumi believed that music and dance represented a means to induce an ecstatic state of universal love and offered a way to liberate the individual from anxiety and pain of daily life. Sadly Ataturk all but banned the dance in 1927 allowing the Dervishes back into their city to dance the sema for just one week annually to commemorate Rumi's death. He transformed the compound into a museum housing Rumi's sarcophagus in a hall with walls adorned with gilded calligraphy, the Dervishes musical instraments and costumes, ancient illustrated Korans and a casket said to contain the Prophet Mohammed's beard.
The 150km drive across the flat, bleak Anatolian steppe where the dust from the ploughing of sugarbeet and grain merged with the anticyclonic gloom to create an artificial horizon just two to three kilometres distant took us to the limits of the Cappadocia region, the prime location of this adventure: but more of that in the next episode.
Posted by Miggy and Neal at 12:13 No comments: