In our last blog we did a disservice to Brindisi. The town is a clean thriving town with grand stone paved boulevards full of chic shops and charming back streets and pretty squares. It has for centuries been the port of Italy that serves the Orient and in the nineteenth century the town was a link on the voyage between London and Bombay. Here Caesar engaged in a fierce sea battle with Pompeius and Antonio and Octavianus divided the Roman Empire. Two Roman columns standing tall above the town quay mark the end of the Via Appia, the Roman road from Rome.

Entertainment during our uneventful 125 mile passage to Dubrovnik was provided by many young and extremely playful common Dolphins having great fun jumping and darting to and fro under Bella. The sight of a Peregrine Falcon flying north on two separate occasions also excited us.

Seen on Augusta, Sicily Navtex a Navigation warning as follows:
Buoy No.204 with coordinates 43°19.8’N 017°36.8’E. Tear itself away from its place. The language of the sea is English but nothing says it has to be the Queen’s English!

Many European nations and. of course, the Tunisians could learn a lot from the Croatian authorities about how to complete entry formalities. The issue of a Vignette, or sailing permit, clearing customs and seeing the Police took less than three quarters of an hour. All we have to show at each harbour or marina from now on is our Vignette and crew list and so no lengthy form filling every time we berth. The Vignette did cost £100 but it is valid for a year!! 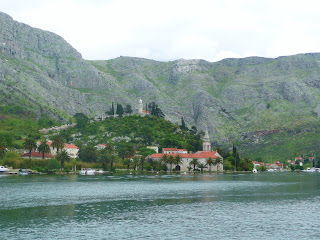 Dubrovnik Marina is a very posh affair charging posh prices at 45 euros a night and it is not even high season. In fact most Marinas in Croatia appear to be about this price which rises by 10% or 20% in July and August. The showers were excellent but the laundry and supermarket were not functioning and the swimming pool was not in use. The Marina is however in a superb setting in the gardens of a former Palace with high, steep tree clad slopes all around. 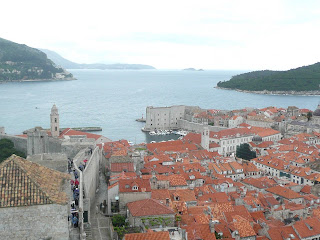 The earliest recorded settlement at Dubrovnik was in the seventh century AD. Since then the town has had a chequered history having been ruled by the Romans, the Venetians, Hungarians and even the French for a while. The town was at its most prosperous during the fifteenth and sixteenth centuries when it possessed the third largest fleet in the world. It has suffered destruction from, amongst other things, the earthquake of 1667 and more recently in 1991 when 2000 Serbian shells and missiles fell on the town. Much of the town now dates from the rebuilding after the earthquake and much effort and money has been spent in repairing the war damage in a remarkably short time. I had been here with my father some forty years ago but I can remember little of Dubrovnik’s magnificence. We walked the impressive city walls from whose ramparts and bastions we looked over the harbour, the stately buildings, the red pantiled roofs and the narrow stepped alleyways. We had a beer and sandwich in a cafe on the main street, Stradun, and wondered over the splendour of the place and the warmth of the atmosphere. 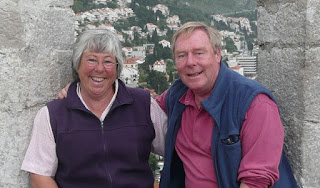 Our cruising ground for the spring comprises the southern and central Dalmatian Islands between Dubrovnik and Sibenik some 120 miles to the North West. The distance between the many Islands rarely exceeds 10 miles and so we are in the main well sheltered from the prevailing winds. Having said that the sea breeze can be fresh late on a summer afternoon. The dreaded ‘Bura’, an unpredictable north easterly wind, can literally fall off the mountains behind the coastal belt and blow very strongly as we found out to our chagrin whilst at anchor overnight in an exposed inlet on the tiny Otok Scedro. Still no damage done, just loss of sleep.

The Island landscape is a mixture of barren rock, maquis, forested slopes and some cultivation, particularly in the form of vineyards, all set against the backdrop of the high rocky mountains of the mainland. We have not seen animals on the Islands but the birdsong especially that of the swallow is deafening.

We would need to write a book to describe all the pleasures, places and delights of the Islands we have visited so far and thus we have mentioned just a few of our favourites in the following paragraphs 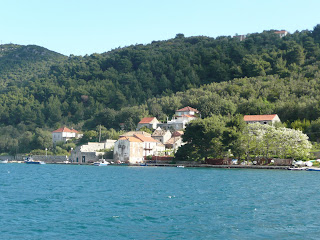 We will always remember the fresh smell of pine as we sailed into Sipanski Luka, the capital of Otok (Island) Sipan, the largest of the Elaphite Island group just north west of Dubrovnik where we spent a very pleasant night at anchor in the long, sheltered inlet. The Elaphite Islands were so named by the natural historian, Pliny the Elder, after the fallow deer he found there. 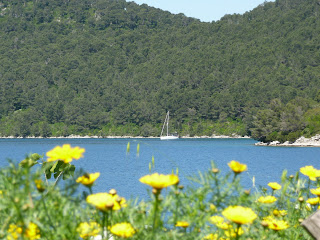 The Island of Mjlet is reputed to be one of the most enchanting in the Adriatic and where legend has it that Calypso held Odysseus for seven years. The north western end of Otok Mljet is a national park by reason of its forest of Aleppo pine and Holm oak which grow densely right down to the rocky foreshore. One would have to go a long way to find such a stunning sheltered anchorage as that in which we found ourselves where the peace was broken only by the gentle ripple of blue green water and the calls of Mongeese imported into the Island to rid it of snakes. 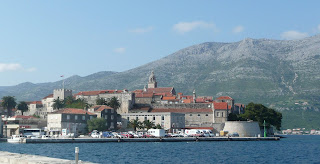 The lovely old town of Korcula on the Island of the same name perched as it is on a hill on a small isthmus jutting out into the Peljeski Kanal, is surrounded by 13th century walls reinforced by the Venetians with bastions and towers in the 15th century. It is an enchanting place with a fine Cathedral and other late 15th century buildings. The narrow streets were designed to lessen the effect of the Bura wind. The town was fought over by the Venetians and the Croat Kings and later by the Genoese and the Turks. In a naval battle between the Genoese and the Venetians in 1298, the Genoese captured Marco Polo who is said to be a native of the town. 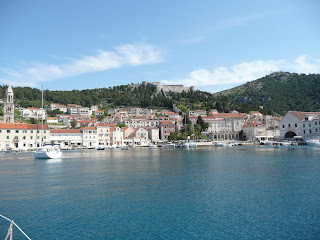 The principal town on Otok Hvar, named Hvar, is an absolute delight which has been under the control of Byzantines, Romans, the Croatian-Hungarian Kingdom and the Venetians from 1278 to 1797; it was during their long rule that the principal public and sacral buildings were constructed. The Cathedral and its bell tower, the Clock Tower and Civic Loggia and the Bishop’s palace were all built during the 15th and 16th centuries and the large plain, yet handsome, Arsenal surround the town’s beautiful square on three sides, the fourth of which is open to the wonderful harbour in which we anchored. This small town has the feel of Venice and the smell of lavender which covers the Island’s hillsides in blue. We were pleased to see the cruise ship ‘Saga Ruby’ anchor in the roads just outside Hvar. It took nearly all day for her passengers to be ferried to and from her for their guided tour of the town. Liberty boats were plying back and forth endlessly.

Another town of interest on Hvar Island is Stari Grad founded in 384BC by the Greeks, or more accurately the Syracusans, with the name of Pharos. It is the oldest town in Croatia and prior to the middle of the 15th century was the capital of Hvar Island. The small old town is absolutely delightful with stone built houses, a Palace and Monastery built around large squares and narrow streets. The stonework is unusual with random coursing and flush jointing. It is reminiscent of the style we saw in Piriac sur Mer and Pornique in the French Loire-Atlantique.

Excellent quality snowy white stone has been quarried in the Islands since Roman times. Stone from Brac was used for most of the palaces and churches in Venice and for facing the White House in Washington. 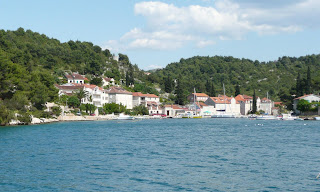 The tiny hamlet of Bobovisce on Otok Brac is occupied only by the indigenous people who speak no English. Our mooring on the quay is a very refreshing, peaceful haven. There is one poorly stocked shop whose keeper has to be summoned from her house by ringing a bell, a local Bar and Restaurant on the quayside and not a church in sight. Nobody has asked us for the mooring dues so we guess that the season hasn’t started here yet. 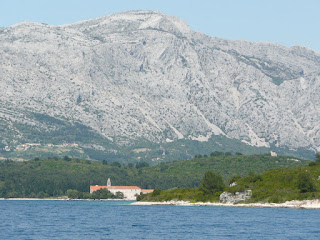 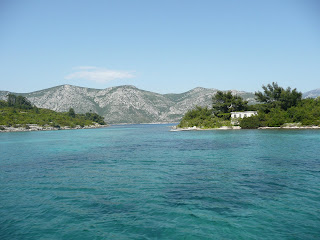 We are so glad to be sailing in these Islands out of season of as we have moorings like this and beautiful anchorages to ourselves whereas in high season we gather things get rather crowded. However, we have been amused by the berthing spectaculars that are staged in the early evening when the sea breeze is at its strongest!

The easy pay as you go internet access from the boat via our mobile and the Italian server TIM has gone and will be replaced by rather patchy and inadequate connection in internet cafes whilst in Croatia. Please forgive, therefore, the possible infrequency of these blogs. We are publishing this blog from the first WiFi connection we have come across in Croatia in this tiny Island of Prvic just offshore from Sibenik. We will be heading North tomorrow and will publish the next episode about Central Dalmatia and the Split/Trogir area when we next have good access.