From Sicily we had decided to make passage as quickly as possible, weather permitting, to Brindisi our last port of call in Italy before crossing the Adriatic to Dubrovnik. The coast of the toe and heel of Italy is inhospitable at this time of year, particularly the Golfo di Squillace (the bay between the toe and the ball of the foot) and the Golfo di Taranto (the bay forming the instep) and ports of refuge are spaced at least a full day’s sail apart.
As we set sail from Riposto, Sicily bound for Crotone a passage of some 24 hours the sky looked evil over the Messina Straights and even more menacing as we passed Capo Spartivento, the most south westerly point of mainland Italy. Sure enough, crossing the Golfo di Squillace was, to say the least, exciting, with violent thunderstorms and 30 knot gusts. We achieved 9 knots under sail, not surfing, and an average of 8 knots for one particular hour. 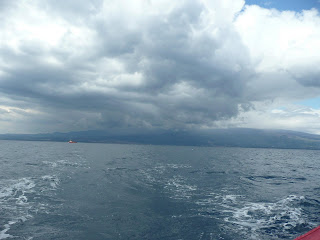 As we made our landfall in the morning of Neal’s 62nd birthday the wind eased and the sea calmed down, Miggy cooked bacon (from Malta) butties as a treat, and we tied up in Crotone with help from a very willing and pleasant Ormaggiatori. I was delighted to receive cards from Betsy and Beryl and I was very excited to receive from Miggy a shirt and a bottle of good brandy.
Crotone is an interesting place with a significant Greek history. The great mathematician and philosopher, Pythagoras, was the City’s best known son who founded his School of Multidisciplinary Research with its basis in Mathematics here in 530BC. It is the regional centre and has a good array of international brand shops and a busy nightlife along the shore, particularly for the young. The array of fine villas is evidence of the fact that the town was extremely wealthy. Indeed it still appears to be so despite the fact that it is a bit worn at the edges! 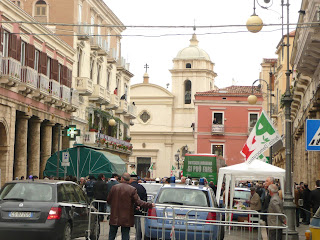 Crotone affords little shelter from the southerly wind and the swell in the harbour makes things very uncomfortable so we decided o move on to S. Maria di Leuca today a trip of 75 miles across the Golfo di Taranto or in other words from the toe to the heel across the instep. We encountered fog in patches with visibility down to 100m and we were very grateful for the radar. There was no wind so we were under engine for the whole passage. We saw Dolphins in 2000 metres of water, of which Miggy took the best photo yet, and there were turtles large and small. 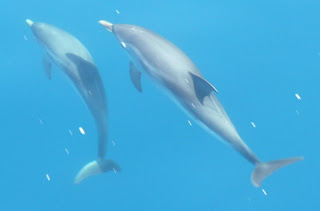 S. Maria di Leuca is also an unprotected, swelly harbour and, considering the forecast of strong winds, we decided to go to Otranto the next day where the shelter was reported to be better. 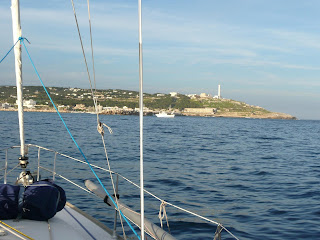 On passage we rounded Capo d’Otranto, the most easterly point in Italy, and crossed latitude 40 degrees N into the Adriatic Sea.
Otranto was one of Republican Rome’s leading ports for trade with the Greeks and Asia. The Normans arrived in the eleventh century but were ousted by the Turks in 1480 when all the inhabitants bar 800 were slaughtered. The survivors were promised their lives if they denounced Christianity but they refused. The bones of the martyrs are housed in the Norman Duomo which has a vast mosaic floor laid in the twelfth century by a solitary monk. The crypt with its columns has the feel of a mosque but there is no information to support this theory. A fifteenth century castle overlooking the port adds to the charm of this quaint place.

As the weather for the following day or two looked unsettled we decided to stay in Otranto for a couple of days and take a train journey inland to Lecce a town that has earned the title of ‘Florence of Baroque Art’ due to the abundance of Baroque architecture. 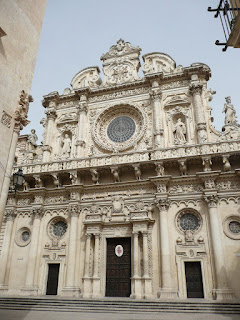 Characterised by rich sculptural decoration this style was possible in Lecce because of the local building material, pietra di Lecce – a soft, easily carved stone. Baroque the facades of the churches certainly are, so much so as to verge on the grotesque. The ice cream was heavenly and the train journey fun, rattling through olive groves and fields ablaze with poppies. 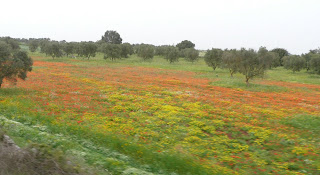 The approaches to the commercial port of Brindisi are festooned with power stations and oil refineries and the town has little to offer the discerning traveller!
For those planning to follow in our wake, Marina prices around the foot of Italy are extremely reasonable being in the region of £13 to £20 mid season for a 10.5 metre yacht.
We are very soon to cross to Dubrovnik and our summer cruising ground through the Islands of the Dalmatian coast to Venice and then back to winter at Lefkas in the Greek Ionian Islands..
Our Croatian Mobile Number operative from on or about the 16th April will be:
+385958382225
Posted by Miggy and Neal at 17:12 2 comments:

The frequent winter gales that howl through the Sicily Straights delaying our departure from Gozo did not too disappointed us as it gave us a chance to explore this beautiful island more extensively.
Our tour of the Island started at Ramla Bay which did not resemble the idyllic swimming beach with great rollers crashing on to its sandy strand. Along the sea road and over the cliffs to Marsalforn, past Obaijar and Xwieni Bays to the Roman saltpans that are still producing many tons of white gold every year. Onward through the towns of Ghasri, Gharb and St Lawrenz each with their picturesque main square with church, police station complete with blue light, red post box and telephone kiosk. Apart from the massive churches each of them could be a market square in any English village. 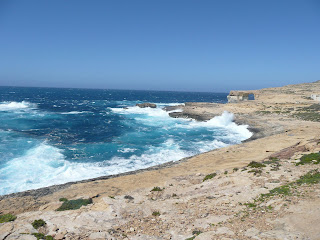 Dwerja Point and the Azure Window, a large hole in the headland, is the picture postcard image of Gozo with a tranquil Mediterranean sea reflecting the sheer limestone cliffs. Not as we saw it, however, with the furious and dramatic with azure waves their breaking tops blown to snowy white spume under the clear blue sky. Here, protected by Fungus Rock, is a bay in which we would have liked to have anchored but not today as even this near landlocked bay was a boiling cauldron of angry water.
The winding track down to the old quarry quay at Hondoq Ir-Rummien gave us breathtaking views over the Island of Comino and its idyllic Blue lagoon where we enjoyed anchoring in rather more settled weather a few days previously. 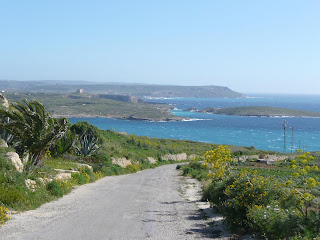 Two things, other than the magnificence of the scenery, will remain in our memories for a long time. The first is the fact that, apart from in the capital Victoria, we were virtually the only car on the roads. We are so thankful that we are here out of season! The second is the sight and smell of the multitudinous number and variety of wild flowers that are abundant in the absolutely natural grasslands.
Our sail across the Straights to Sicily was uneventful and we made our landfall at Marzamemi on the east coast, an undistinguished but friendly place. We intended our visit to Sicily to be brief and to include just the City of Siracusa and Mount Etna. 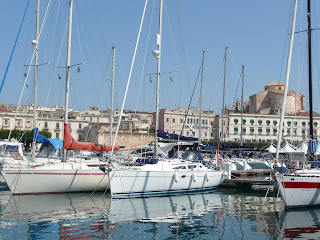 The ancient Mediterranean settlement on the Island of Ortigia, the old town of Siracusa, inhabited since the Greeks arrived in 480BC, was one of the most important of Cities of the ancient Greek world and as Cicero declared the most beautiful. It is a veritable jewel. Its Grecian history is in evidence everywhere from the Temple of Apollo and the incredible Theatre carved out of the rock hillside to the Temple of Athena now incorporated into the 18th century Duomo. It is amazing to see the Greek and the Gothic pillars side by side and as a total disparity, the intricate Baroque facade. The church of Siracusa was the first to be founded by St Peter and, after the church of Antiochia, the second to be dedicated to Christ. 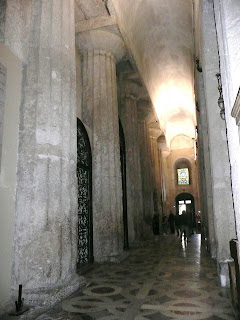 The imperial Piazzas, one of which is named after Siracusa’s most famous son Archimedes, and the maze of narrow streets with their exquisite 14th and 15th century palazzos and the grand 19th and early 20th century buildings fronting the Harbour bestow upon the place the atmosphere of Venice on land. Nelson watered his fleet here from a natural spring on the harbour side in which papyrus grows and where, legend has it, Aretusa emerged from the ground having been changed into a spring by Artemis to escape her lover Alpheus. 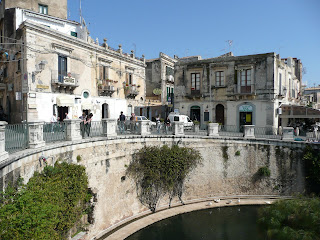 We walked for miles to the Archaeological Park of Neapolis on the outskirts of Siracusa. The Roman amphitheatre is disappointingly small and dilapidated compared with those we have seen in Rome and Tunisia but the Greek Theatre is colossal, the biggest in the Magna Greaccia, and stunningly carved out of the rock of the hillside. 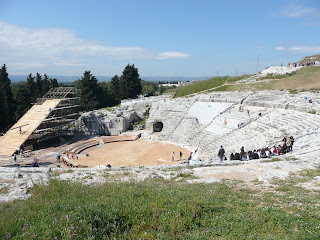 Beside the Theatre is a Quarry of magnificent proportion aptly called the ‘Latomies of Paradise’ for its lush vegetation and citrus trees. Cut into the face of the quarried rock is the huge cave of ‘The ear of Dionysius’ named so as it is shaped like an ear. The acoustics in this vast chamber are extraordinary. 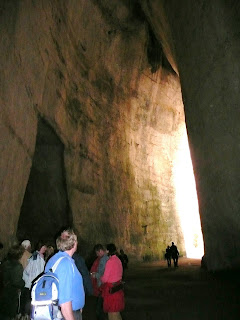 One wonders how the Greeks undertook such massive tasks with such precision with the limited and minimal tools available to them.
Weather forecasts for our next passage north along the coast were conflicting with either a westerly Force 3-4 or a north westerly Force7! During our eight hour sail to Riposto we had mostly the former with Bella picked romping along in the 12 to 15 knot breeze just forward of the beam at a creditable 7 to 8 knots even though laden as she is. Under the influence of Cyclops the one eyed monster on Mount Etna however we had 180 degree wind shifts and 30 knots of wind on the nose. 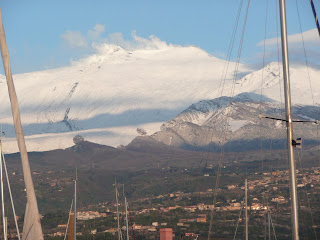 What a magnificent sight this snow capped volcano is. We are so lucky to see it at all, let alone as clearly, as it is usually, particularly during the summer, swathed in cloud and haze. Yet another good reason for sailing this part of the world in the late winter and spring. The setting for the marina and town is wonderful with Etna dominating the skyline. It is a bit like being on the shores of an Alpine lake. 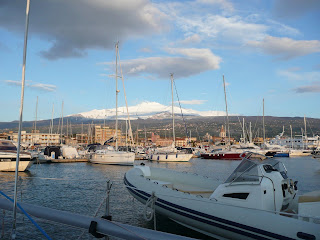 For the sailors amongst you looking to budget for marina prices in this area it is mid season and they have varied from £16 in Marzamemi to £28 in Siracusa and Riposto.
Our next adventure will take us to the foot of Italy and then onward to Croatia.
Posted by Miggy and Neal at 17:45 27 comments: