Sad to leave Finike, our excellent winter base, we motored in light headwinds to the protected anchorage at Ucagis Limani, one of our favourites from last year. A flying fish danced in the air just as we left the marina breakwater as if to wish us well for the season ahead. Bella seems as if she had been loosed from her chains and was happy swinging at anchor and we were excited to be at sea again looking forward to adventures new. From Ucagis to the Greek island outpost of Kastellorizon, one of the special places we have visited during our Mediterranean cruise. 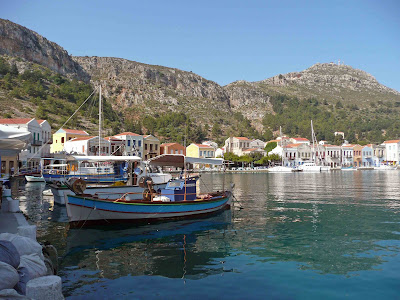 After this nostalgic indulgence we were ready to explore pastures new, the first being Rhodes. We were advised that finding a berth at Rhodes Mandraki harbour is a problem even at this time of year. We therefore arranged to reserve a berth for two nights through an Agent, A1 Yacht Trade Consortium, albeit at a fee of 150€! The fact that we were shown directly to a private berth on arrival while other yachts were scrambling for the limited or nonexistent public berths convinced us that the cost of an Agent was worthwhile as did the fact that he successfully negotiated customs and port police clearance where there were self inflicted problems in that, having not cleared into Greece at Kastellorizon, we were deemed to have come directly from Turkey. We even faced the threat of a fine for misstating the facts! Left to our own devices with the authorities doubtlessly we would not have fared as well. 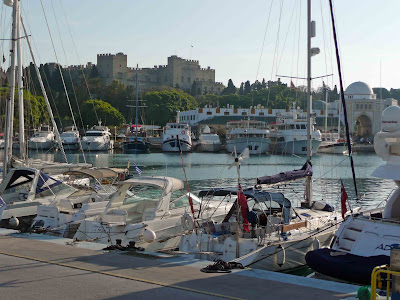 Rhodes, the capital of the Dodecanese archipelago, has been an important centre since the 5th century BC and was a vital part of the Roman and Byzantine empires before occupation by the Knights of St John from 1306 to 1522.
The Old City which, being the stronghold of the Knights of St John, is reminiscent of Malta, Bodrum, Kos and other places that the Knights conquered and ruled with a rod of iron and which we have visited albeit with a very much less warlike intention.
The Knights citadel built in 1309, surrounded by 4Km of massive defensive walls, is dominated by the Palace of the Grand Masters with its magnificent castellated and crenulated horseshoe shaped towers,  fine marble tiled central courtyard and elegant chambers. 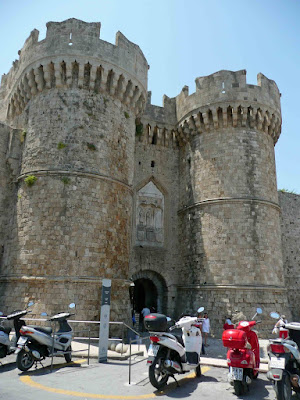 The Inns of the Tongues which were occupied by the various nationalities of the Order of St John line the Street of Knights which runs from the palace to the harbour. The Inns have coats of arms carved in stone within their austere facades. It was in this street that the Knights would muster at times of attack.
The Old City is divided into the Collachium, the Knights quarter containing the Palace and the Inns and the Bourg which housed the remaining population including Jews and Turks as well as Greeks.
The city is has been superbly preserved and expertly reconstructed where necessary and so has an extremely close resemblance to that occupied by the Knights in medieval times. It is worthy of its World Heritage Site status. We were glad not to have missed the visit despite the problems. 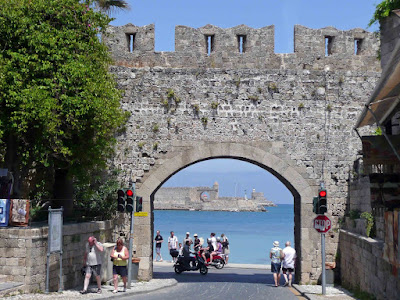 We spent a day or two relaxing in the beautiful anchorage of Panormittis on Symi Island. Our peace was broken only by peacocks squalling like tomcats in stark contrast to the kids calling sweetly if soulfully for their mothers. Strong winds arrived during the day with 26°C and brilliant sunshine and Miggy had her first swim of the season in beautiful clear water. In the evening and into the night, just like the last time we were here, the wind rose to 40 knots. Yachts were dragging all over the place but not, thankfully, to affect us. We held firm as a rock.
We were pleased to be joined by Peter and Val on 'Noisette' in Panormittis and to sail in company with them on the next stage of our travels to the Dodecanese islands of Tilos and Nisyros. 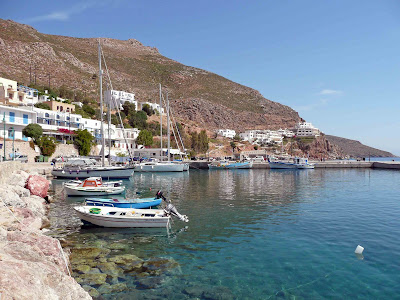 A light to moderate W/NW wind gave us good sailing for roughly half the passage to Tilos Island and sailing into the bay was delightful both in terms of being under canvas and the scenery.  The tiny harbour of Livadhiou is sheltered except from the southeast and is equipped with electricity and water. The fee for mooring is around 14€ per day. The winter compliment of about ten yachts increases to around forty during the summer. We have seen a photograph of the mêlée at this time where you can walk from one side to the other without wetting your feet! 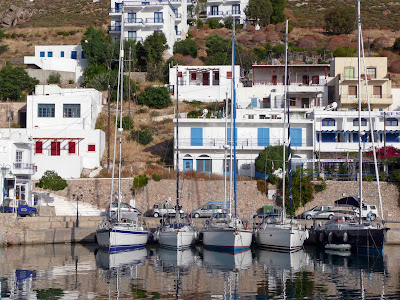 Tilos is fertile and the lush valley in the interior comprises small farms growing varied crops from Almonds to Tobacco. Its hills are scattered with chapels and ruins of Crusader castles, remnants of the rule of the Knights of St John from 1309 to 1522.
The birth and domicile on the Island of the 4th century BC poet Erinna of 'Distaff' fame has left a legacy of poetry and music on the Island. 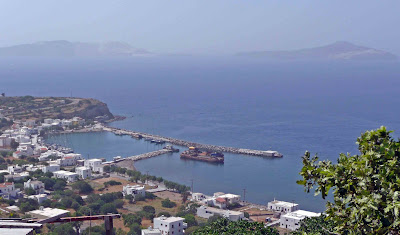 Nisyros Island is almost conical in shape and is mostly mountainous consisting of volcanic rock formations and outcrops of stone produced by periodic eruptions.
Greek myth has it that Nisyros was formed when, at the conclusion of the battle of gods and giants, Poseidon, god of the sea, pursued and caught up with the giant Polybotes, broke off a lump of Kos Island with his trident and hurled it at him. Lying under Poseidon's missile, the present day island of Nisyros, he sometimes sighs and groans thus explaining the phenomenon of the volcano. 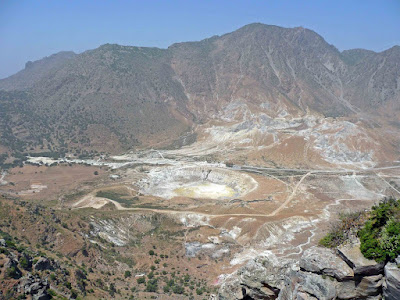 More likely but less fun is the fact that Nisyros lies on the same Aegean volcanic fault line as Santorini, Poros and Milos and that there was a massive eruption some 24,000 years ago. Eruptions over the years, the latest in 1873, have left a caldera with a number of craters still exhibiting boiling mud pots and gas vents surrounded with pure sulphur crystals and a stench of rotten eggs! 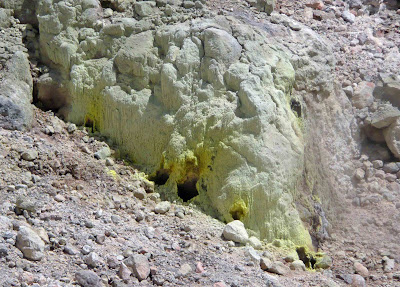 The geomorphology and tectonic structure of the Island has led to the formation of underground hot springs known for their medicinal properties as far back as Hippocrates. Near Pali lies the now abandoned Hydropathic Institute, a massive complex of buildings, showing the popularity of this therapy in bygone days.
On the rim of the crater lie the pretty villages of Emporeios and Nikia, where we lunched, with their blue shuttered whitewashed houses and narrow stone streets.
Perhaps the most poignant of the sights of Nisyros is the tiny derelict village of Avlaki once the principal port of the Island. In bygone days ships unloaded their cargo at this tiny harbour for onward transport by donkey along a steep and tortuous trail to Emporeios. Then in the thirties roads were built and the more sheltered town and port of Mandraki took over the role of Avlaki and Emporeios. Such is progress. 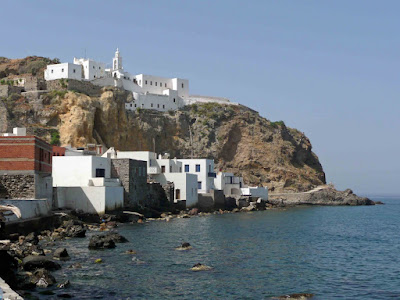 The attractive fishing village of Pali where we berthed has little other than a baker, a church, and three Tavernas and is delightfully peaceful. The former fishing harbour has been reformed with the entrance facing east as protection from the Meltemi wind. It has been dredged throughout to about 4m and water and electricity are available at all berths. We paid just 5€ every other day for our electricity. It is a comparatively large safe haven for roughly thirty yachts.
It is surprising that small islands such as Nisyros and Tilos are able to make such provision for yachtsmen whereas construction of the Marina in mighty Rhodes, where the need is critical, has been static for years. 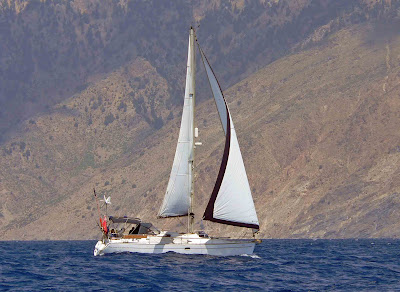 A fast sail north to Kos puts us within easy reach of the Turkish Gulluk Korfezi where we look forward immensely to Jane and John, Miggy's sister and her husband, joining us for a week.
Posted by Miggy and Neal at 08:19 5 comments: