North for summer, South for winter

Somehow during the flight back to the UK we managed to get involved in an argument with an odious chap sitting next to us. The reason matters not but his final words are worthy of note and they were ‘’...I demand to see the Captain. I want these people (us!) thrown off this aircraft.’’ – and this at 37,000 feet!
We certainly escaped the heat of the Mediterranean summer by going back for the English summer. As we arrived the North had just experienced and the West Midlands and Thames Valley were about to experience their worst flooding in centuries. The temperature seldom rose above 17°C below the thick blanket of cloud that covered the Southern skies. It was only during the last week of our seven week stay that the clouds cleared to expose the sun.
It was good to see family and friends again. Close family met in the beautiful churchyard on Chosen Hill overlooking the Gloucestershire countryside to dedicate the headstone at Miggy’s father, David’s, grave. Johnny led the short, moving service of prayers in his usual committed, caring and relaxed style
We had a great BBQ at my cousin Lorri and Jim’s where we caught up with the news from my family including, Danny, Stan and Pat and Joan. We learned to play the ancient game of horseshoe throwing and a modern electronic one.
An unfortunate event, that of my Uncle John’s funeral brought us together with my father’s side of the family for the first time for ages including Godfrey and Debbie and Dianne and John. We also met with Beryl and Gerry with whom we were to share an enjoyable time at Sunday lunch in the Royal Lymington Yacht Club a little later on.
A pleasant drive through the Garden of England found us in Deal visiting Marion Satterley and meeting Peter and Mary Crowther, Miggy’s brother in law’s folks, at the Royal Oak, Langstone Harbour for lunch was a real pleasure. 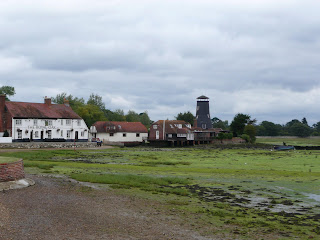 Meeting with friends was a pleasure. We were honoured to be included on the exclusive guest list for Sue Burr’s birthday supper at The Mill, Gordleton. To be invited to Adrian and Clare Whinney’s little boys Josh and Hamish’s baptism was a privilege and it was great to catch up with Adrian and Clare at the BBQ afterwards. Fun times with Ted and Iris Watts, John and Annie Corden, Ken and Jackie Hay and Roger and Sue Breese, mostly over the supper table or round a BBQ reminded us, not that we needed to be reminded, what treasured friends we have back in old Blighty. 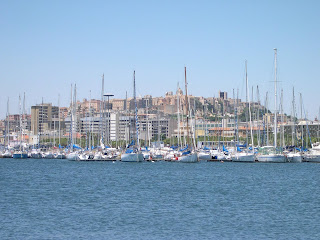 We arrived back in Cagliari, Sardinia to be met by Gary in the Marina’s limousine. The limo is an aged battered Fiat Panda and the chauffeur, Gary, is an English legend in the Marina del Sole who willingly helps people in all manner of ways and is a fountain of knowledge on local people, places, goods and services. The Marina is run by father and son, Antonelli and Massimilio, who welcome visiting yachts and charge reasonable, if not inexpensive, prices for this part of the world. 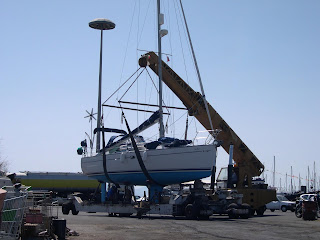 Poor Bella, who had been propped up on the hard standing since our departure for the UK, was filthy. Her decks, coachroof and cockpit, having been immaculate on our departure, were covered with dust from the yard and also with half the Sahara Desert that fell with the rain in a recent Sirocco, a warm wind from the south. She was launched the day after we got back and then scrubbed up very well to look like new. We have provisioned Bella for our onward journey with tins and tins of European food just in case we tire of couscous and with wine by the flagon at 1 euro per litre. Actually it’s very quaffable. 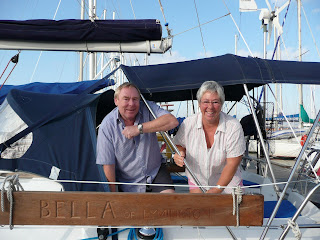 The weather courtesy Cagliari Navtex and local forecasts looks set fair for our 24 to 30 hour passage to Tabarka, Tunisia starting on Wednesday the 12th September. Tabarka is the most westerly port in Tunisia just inside the border with Algeria. From there we will cruise the north and east coasts of the Country until we reach our winter berth in Monastir on or about the 15th October. This will encompass the entire length of Ramadan during which, from sunrise to sunset, Muslims must not eat, drink or have sex!
Talking of Cagliari Navtex here is a Navigation Warning received today ‘’...From now until further notice signalled a relic in position 38 08.3421N – 012 11.5317E with positioned one circular buoy of red color, one small buoy of orange color and Balls Japanese Type. Within 1 mile of radius from the coordinated point, are interdicted the navigation, the anchorage, the fishing and any other activity maritime in surface and in immersion...’’
Posted by Miggy and Neal at 08:49 2 comments: