On April the eleventh we had the not unexpected news that Miggy’s Dad, David Wilson, had died. Miggy feels sadness and a great sense of loss. The sad day of David’s funeral was transformed into a happy and memorable day by the presence of family and friends. The service at St Bartholomew’s was dignified and beautifully conducted by Johnny, Miggy’s brother in law. David was buried in the churchyard in the beautiful and tranquil setting at the top of Chosen Hill, Gloucestershire. The gathering of family and friends at Betsy’s house was a relaxed and enjoyable affair and the entire day was more a celebration of David’s long and fruitful life rather than a mourning of his death. 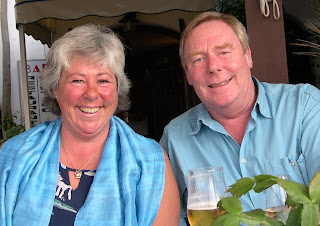 On a more cheerful note the fifteenth of the month was our thirteenth wedding anniversary. It is amazing how quickly the years pass. They have been happy and productive years with little exception. A lot has happened during that time not least of which was our retirement and the launch of our adventure to the Mediterranean. Our successes include the creation of a thriving and well respected sailing school and Miggy’s continuing excellence in giving first class care to her patients. Amongst our sad moments are the deaths of Bill, Gret, Derek and Kevin in Neal’s family and very recently David as we have mentioned above.

We left Almerima soon after our return from the UK and sailed east. It was not long before we said farewell to Andalucia and lowered the regional flag that had flown aloft for seven months. We have enjoyed Andalucia immensely and the highlights of Rota and our trips to Sevilla, Jerez, the Pueblos Blancos, the Alpujarras, Cordoba, Granada and the Alhambra will stay in our thoughts forever. 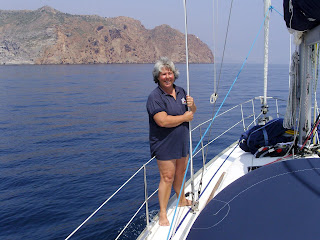 We are now travelling in the region of Murcia and along the British playground of the Costa Blanca. Apart from the odd resort around Garrucha, Aquilas and Mazarron the coastal scenery all the way to Cartagena and beyond to Cabo de Palos, just south of the Mar Menor, is spectacular with sandy coves nestling in the hills of the Sierra de la Almenara that rise directly from the waters edge. There is wide-ranging birdlife on the cliff faces and the many Moorish castles built in impossible places high up on the peaks are truly remarkable. 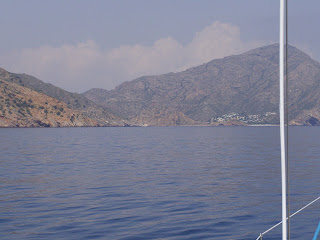 During one of our passages a languishing turtle came to say ‘hola’ and swam lazily away not at all fussed by our size or the noise of our engine. Miggy took the hint and that evening whilst anchored swam for the first time this season in nineteen degrees.

Only the nudists on the beach interrupted the splendour and solitude of an anchorage in a beautiful bay just west of Cartagena surrounded by stunning hills. Yes, unknown to us, we had anchored directly off a naturalist’s campsite! The natives were friendly, however, and came out in their canoes to greet us. 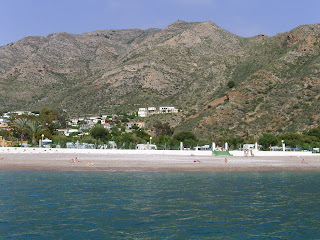 Our pleasant coastal passage from the previous night’s idyllic anchorage was abruptly ended as we rounded Cabo de Palos to be confronted by the horrors of La Manga and the high rise resort strip between the Mar Menor and the open sea. The difference in scenery within such a short distance along this coast is extraordinary. How could man do such damage to this wonderful planet! Despite the horror of the landscape, the Spanish equivalent of the ‘Red Arrows’ performed a magnificent display for us. 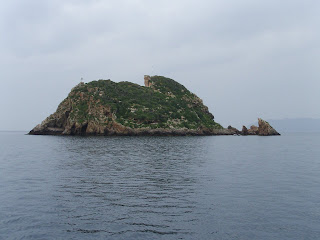 We anchored in Torrevieja, which can be roughly translated as ‘the pits’, but had the pleasure there of meeting Ray and June Baines, late of Lymington and now living close to here, for an extended lunch. 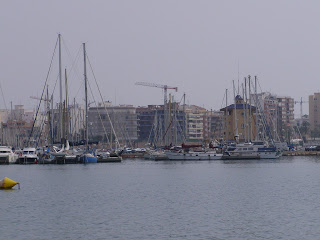 Onward along this coast with the delight of seeing Striped Dolphins and Mediterranean Spearfish and more horrors such as Alicante, Benidorm and Calpe nestling, if you can call it that, in the dramatic and beautiful backdrop of the hills of the Valencia region and across the Greenwich meridian until we moored in Morayra, a jewel within all this madness. 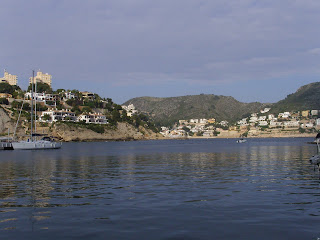 We have finished our trip along the Costa del Sol and Costa Blanca and will set off for the Balearics from here as soon as we victual ‘Bella’.
Posted by Miggy and Neal at 17:45 No comments:

The Pillars of Hercules

We have moved for the first time in six months and it feels strange. Although Rota had become our home it was time to make the break. We shall miss this dear town but are looking forward to savouring pastures new.

We sailed south towards the Straits of Gibraltar passing Cadiz and Cape Trafalgar, the site of Nelson’s famous victory over the Spanish and the French fleets. This called for the customary salute of dipping the ensign and drinking a tot! 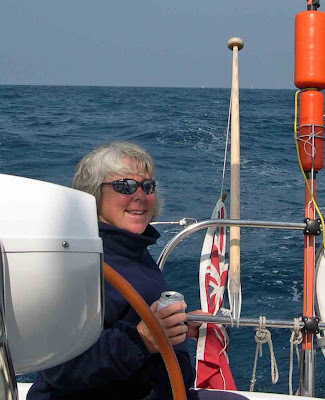 We hugged Tarifa point, the south westernmost tip of Spain and sailed parallel to the lush coastal slopes of the Spanish hills and saw Puffins flying north having wintered in Morocco. 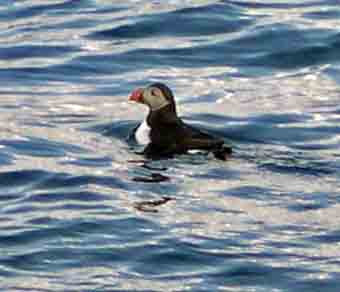 With Gibraltar abeam we laid a course directly for Ceuta under full sail and a fresh breeze and enjoyed two hours of tremendous sailing directly between the legendary ‘Pillars of Hercules, Calpe or the Rock of Gibraltar and Abyla or Ceuta, two rocks separating not only the narrow stretch of disturbed water between widely differing continents but also the landlocked Mediterranean sea and the massive open Atlantic Ocean. Another opinion has it that the Pillar on the North African side is Mount Jbel Musa. It matters not but at the time this was the edge of the known world and possibly the site of Hades! 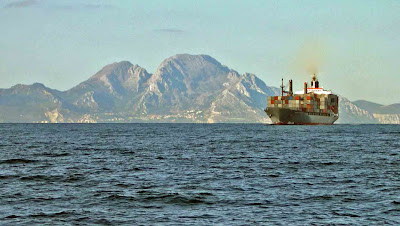 When Hercules was on his tenth labour one version has it that he found Africa and Europe joined and so he forced them apart to form the Straits. Another version has it that he found the continents too far apart and so closed the gap to keep out the monsters. Either way he raised the two pillars to commemorate his achievement. On either side of the entrance to Ceuta Harbour stands an impressive bronze statue, one showing Hercules pushing apart the pillars and the other him pulling them together. 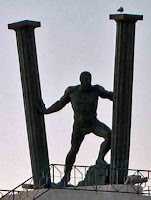 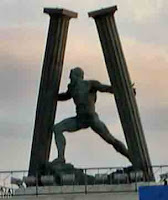 I hope our dear friend Gwyneth Lewis will forgive me quoting an interesting passage from her delightfully moving and witty book ‘Two in a Boat’, The True Story of a Marital Rite of Passage’, a must read for those contemplating a long journey at close quarters.’…These two rocky mountains, facing one another across such a narrow stretch of water, appeared as twin columns on the design of the early pieces of eight shipped to Spain from South America. Later, these were transformed into the parallel lines down the S of the American dollar sign, representing the gateway between the old word and the new…. Thus, the Pillars of Hercules are at the symbolic centre of the global capitalist economy…’ 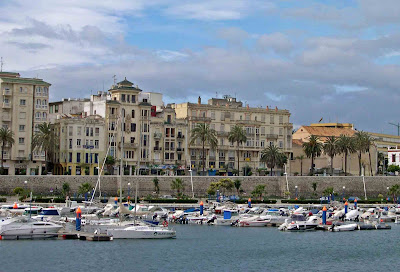 Ceuta, although a colonial Spanish enclave on the northeastern tip of Morocco in North Africa, does have an Arab flavour witnessed by the dress of a significant minority and the service of non-alcoholic beer in some cafes. The town possesses grand buildings and squares filled with splashing fountains, colourful flowers and exotic trees. There are wonderful views over the Mediterranean to Gibraltar and the Hills of Spain to the north and to the mountains of Morocco to the west and south. 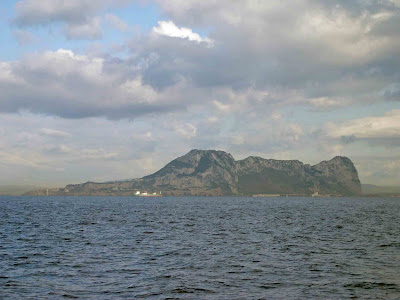 Miggy. A PADI qualified diver, bought full Scuba diving kit in Ceuta at an amazingly discounted price. It is first class Italian gear and will not only give her pleasure but will be very useful in the event of underwater problems with Bella.

On our way to the Costa del Sol yelps of glee from Miggy heralded visits from Dolphins in the Straits. Four of them played around the bow for a while much to Miggy’s delight. We encountered a lone puffin sitting in the water and not flying away as we approached. Perhaps he was tired or had become lost on his way north. Good luck to the little fellow. 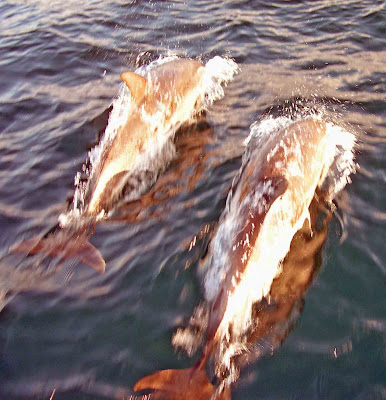 Estepona was our home for a few days while Mary and Peter Crowther, residents of nearby Sotogrande, entertained us royally in their home. They drove us to a Pueblo Blanco (white village) up in the Sierra Bermeja above Estepona called Casares. It is typical with white houses clinging to steep rock faces and a church and remains of a Moorish castle atop the hill. The difference with this particular village is that one side of the hill is a sheer rock face down which, in the fourteenth century, the enemy of the captors were hurled alive. Barbaric you may say but this practice was also employed in the nineteenth century during the Spanish Civil War.

The sixth of April was the first anniversary of our departure and Neal’s sixty first birthday. We celebrated both occasions in a bizarre place called Benaldamena, which was reminiscent of a Disney film set. Amongst the crowds and numerous food outlets from Japanese to Mexican we found a lovely Spanish restaurant that served us with beautiful garlic prawns, grilled asparagus and beautifully cooked fillet steaks. 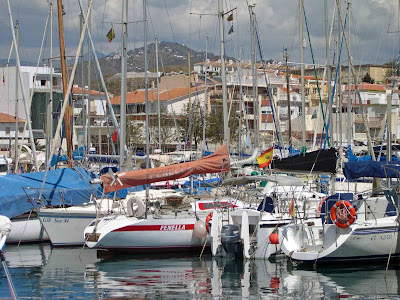 Our sail along the Costa del Sol has taken us past those infamous English resorts of Fuengirola, Torremolinos and Malaga. I need say no more! We are now berthed in a Marina just east of Torre del Mar at a place called Caleta de Velez, which is surprisingly Spanish and has parakeets nesting in the palms and generally making a lot of noise. 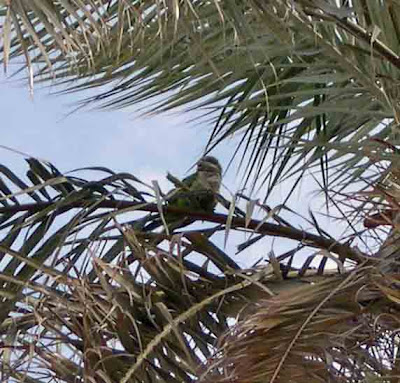 Miggy’s next broadcast on Radio Solent is at around 0630 on Wednesday the 25th April.
Posted by Miggy and Neal at 16:19 No comments: