A Land of Mystery and Beauty

Imagine a land where the giant pines thrust up through the mist towards the snow capped peaks of the mountains above, where gushing torrents cut through lush valleys, where mysterious castles overlook white sand beaches and crystal clear turquoise water. That land is Corsica, a small French Island only seventy miles from Rome and very much Italian in flavour and culture. 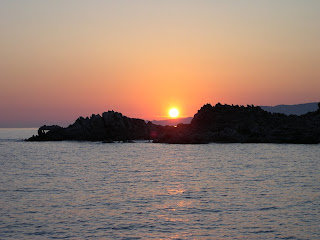 We have explored the south of Corsica in Bella from the capital of the Island Ajaccio, the birthplace of Napoleon Bonaparte, on the west coast to Porto Vecchio, a Genovese walled Citadella on the east coast. In between we have anchored in beautiful bays where the water is so clear over the white sand seabed that one can see the anchor set five metres down and we visited the enchanting town of Bonifacio. 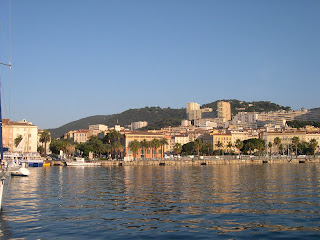 The entrance to Bonifacio from seaward is outstanding passing the narrow gap between high craggy white chalk cliffs with many caves and bizarre shapes that have been sculpted by wind and sea. Bonifacio town sits high on a spit of land separating the two mile long narrow fiord like inlet from the sea. It has been likened to a ship carved out of the rock. The massive Bastion de L’Etendard dominates the marina. A steep and exhausting, but ultimately rewarding, climb from the Marina and its waterside restaurants and bars leads to the medieval Haute Ville with its tall shuttered houses lining the narrow streets. Being on an outcrop of rock Bonifacio has enforced boundaries that obviate the urban sprawl that other towns have. It is so refreshing to see no industrial zone, no housing estate, and no shopping precinct. 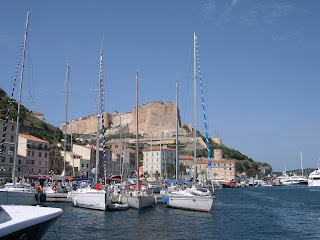 At the tip of Bonifacio’s promontory past the Genovese towers of the early fortifications is the Bosco area. Here there is the Cemetiere Marin with its Family mortuary chapels where the bodies of those that pass away are incarcerated in tomb like slots and blocked in with an engraved slab. These can be seen all over the Island and appear at first sight from seaward to be villages. 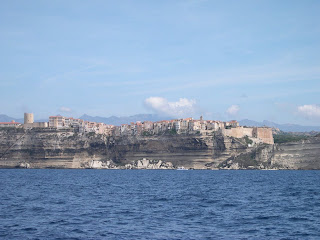 We had an excellent supper at the restaurant in which Miggy and her ‘flotilla’ friends eat some seventeen years ago. At that time she had to have her prawns ‘pureed’ because she had fallen and damaged her mouth seriously. This time we had enormous tasty prawns with a mustardy mayonnaise preceded by a ‘marmite’ of various fish in a rich soup.

A wonderful day’s touring the parts of Corsica that we will not visit by sea made the exorbitant car hire price worth every euro. We actually drove for about ten hours north through the middle of the Island and back south down the west coast.

The mountains, the highest still snow capped, rise along the north south central spine of the island up to the 2700 metre peak of Monte Cinto. The foothills are covered with Maquis, Olive and Chestnut trees and the central zone of the island, except for the lush valley floors and areas destroyed by fire, is an immense forest of Conifers dominated by giant Laricio pines. There are also many Eucalyptus trees introduced in 1868 to drain the swamps and so help eradicate Malaria. 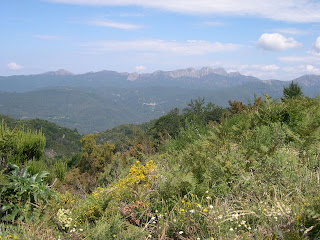 Corsica receives heavier rainfall than other Mediterranean Islands and so has torrents cutting gorges through the granite mountain slopes. Guy de Maupassant wrote, “Imagine a world still in the midst of chaos, a tempest of mountains separating narrow gorges in which torrents flow…. no plains, but rather immense waves of granite and colossal undulations or earth covered with Maquis or tall chestnut and pine forests”

There is an abundance of Flora with wild Roses, myrtle wild rosemary, wild fennel and broom whose colours paint the hillsides and whose essences fill the air. The mountains and hill have a truly ‘alpine’ feel. Animals roam freely along the roads. Pigs with their Piglets, cows and Goats caused us to stop on many occasion. Unfortunately we did not come across the wild boar, Corsican deer, moufflon or Hermann’s tortoise. Neither did we spot a golden eagle. 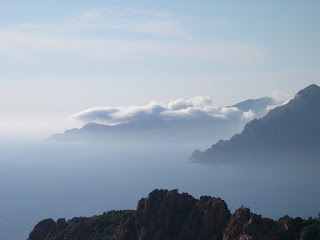 The west coast is most scenic with tall cliffs plunging into a crystal sea. Perhaps the most scenic of all is the coastline of the Scandola Nature reserve between Calvi and Ajaccio where the cliffs are red from ancient volcanic eruption as evidenced so well by the Calanques de Piana, granite rock formations weathered by wind and rain into extraordinary shapes which change from gold to pink and bright red depending on the time of day.

Of the wonderful bays in which we have anchored in Corsica, Golfe de Rondinara on the southeast coats will linger in our memories. Although crowded at lunchtime this turquoise water, white sand bay was left to a few other yachts, the cows and us by evening. It is where we departed Corsica to sail across the infamous Bouches de Bonifacio to the Madellena Archipelago off Sardinia, more of which next time together with our passage from Menorca to, and the northwest of, Sardinia, albeit out of date order. 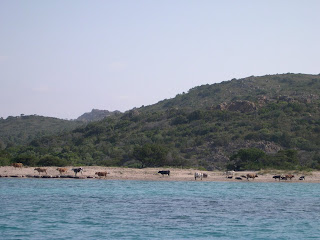 Rondinara is also where we said fond farewells to our dear friends Renate and Hanspeter who we met in Rota last year and with whom we have ventured this far albeit not in company but rather crossing paths from time to time. They are travelling north to the French mainland via Elbe to take their yacht ‘Flamingo’ through the canals and ultimately to Holland to sell having been travelling round the world for the last fifteen years or so. We do hope to visit them in Switzerland in the not too far distant future.

We were surprised that Marinas and anchorages were not more crowded but then, of course, it is not yet the high season of July and August when the mainland French invade on mass. The mid season price of the Marinas was reasonable at around 28 euros per night in Ajaccio, Bonifaccio and Porto Vecchio. The anchorages are free. The cost of food, drink and the like in Corsica is expensive, however, being on a par with that in the UK. 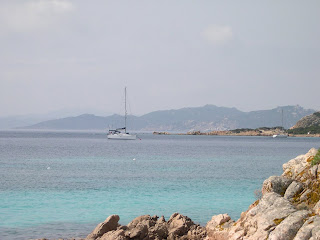 We will be travelling back to the UK mid July with the intention of staying until the end of August in order to miss the heat and the silly season as regards pricey and crowded Marinas and anchorages and charter yacht antics. We look forward to seeing family and friends again during that time.