New Year’s Eve in Rota was a bit like the celebrations in Trafalgar Square except nobody throws themselves into icy fountain pools or sings raucous choruses of Auld Lang Syne, not knowing the words!

We gathered in the town square with Tom and Louise and Stephane and Muriel, half the townsfolk of Rota and many from the American Base. The Ayuntamiento de Rota (Town Council) provided party bags for everybody with funny hats, false noses and moustaches, hooters, garlands and streamers. 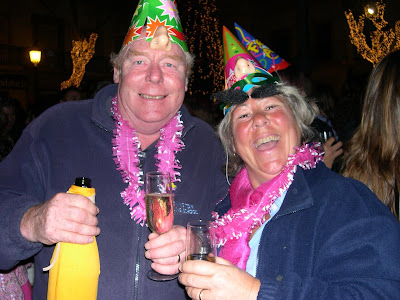 As the clock strikes midnight it is customary to doce uvas horas suenos (eat a grape at each strike of the clock) and to drink the Spanish bubbly, Cava. The grape bit is not so easy but the bubbly slides down very well! 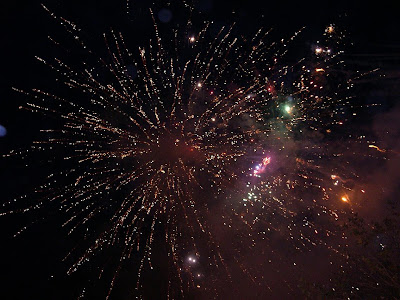 Then there were magnificent loud crackly and colourful fireworks and a great band with singers and dancers that played Flamenco for goodness knows how long. 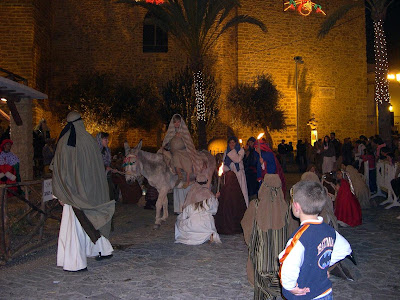 Between Christmas and New Year we saw a Living Nativity where one parades as a group around scenes of the Nativity acted by schoolchildren in various venues in the town. The streets are lit with beacons and the beach has been spread along the roads. The entire farmyard has been bought into town including Donkeys, Hens, Ducks, Rabbits, Horses, goats, one of which was about to do her own nativity, and tiny little kids. 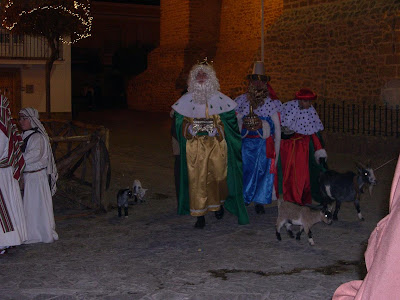 The three kings, who were on horseback, were the focus of the attention of the young in the audience, as they want good presents from them on the 6th of January. Carols were sung in the Church Square around the final scene at the crib in the stable. All this after Christmas but delightful. 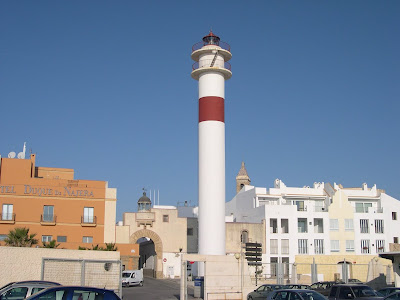 On New Year’s Day we again had a cloudless day with 20ºC in the shade at lunchtime. We walked the two and a half kilometres along the beach and back and saw people sitting in deckchairs and picnicking on the sand. The sky was so blue and has been for weeks that you can understand why this coast is called the Costa De Luz. You can also accept the sunshine statistic for Rota at 3200 hours per year.

The festivities over, we are now looking forward to coming home to the UK and a full sized double bed and a big armchair! Actually we have been very comfortable in this little waterborne home of ours and have missed very few of the so called ‘home comforts’. We have missed family and friends, however and we look forward to seeing you soon back in the UK. We arrive late on the 14th of January and stay until the 21st February. During our stay in the UK our contact details are as follows:

Email – miggyandneal@hotmail.co.uk
Posted by Miggy and Neal at 10:26 1 comment: