You can tell just how crazy yachties become when they have been tied up in port for too long when they engage in Miggy’s idea of paper boat racing. Two classes competed, kids under twelve and big kids and a healthy number of competitors with a gallimaufry of boats raced them from pontoon to pontoon. It was a glorious free for all on the water with no protests or claims for redress allowed. Miggy’s boat won along with shouts of ‘fix’ but she got a fine returnable trophy, a nice bottle of wine and a voucher for €50 which she had no trouble spending in Paleros’s, the sponsors, chandlery. We hope we have made our mark, bizarre as it may be, as the resident marina bertholders and the sponsors hope to make this race an annual event to involve not just the marina but local businesses and organisations and in particular the kids.

After the racing Miggy had organised a self catering ‘Fitting Out Party’. It was very well attended and the variety, amount and quality of the food were excellent. The Party was a fitting occasion to say our farewells to those with whom we had spent an extremely pleasant, if not wet, winter in Lefkas.

For those who follow in our wake our advice is to winter at Lefkas marina rather than Gouvia marina in Corfu. The former is well managed and within a short walk of the delightful small town whereas the latter does not possess either attribute!

Beware, however, of using Joe Charlton, Contract Yacht Services Ltd (CYS), for work on your yacht as he and his employees overstate the hours worked. We were on the boat all the time his chaps were working so we knew precisely how many hours should have been billed. We settled his labour bill for 40% of the amount he wanted.

Corfu is the most northern of the Heptanesoi, the seven Islands of the Ionian. Paxos, Andipaxos, Lefkas, Ithaca, Kefalonia and Zakinthos lie to the south. We wrote about Corfu, Paxos and Andipaxos in a previous blog (October 2008 – Montenegro to Lefkas).

It was time for Neal to reminisce and to introduce Miggy to those parts of the Ionian he had sailed on flotilla some thirty years ago, namely, the south of Lefkas, Ithaca, Kefalonia and Meganisi.

Our first landfall was Vathi on Meganisi just twelve miles south of Lefkas town. This dusty sleepy little place was even more asleep than ever and we were the only yacht anchored there. Those who intend to visit this place later this year will be pleased to learn that the town quay was being dredged whilst we were there. 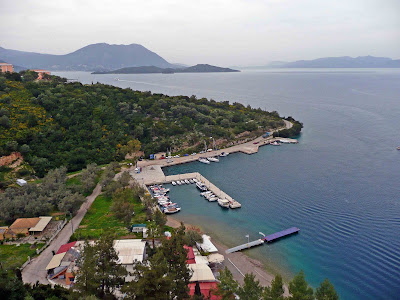 Spartakhori on Meganisi is an enchanting village of whitewashed houses and narrow streets high on a hill overlooking the harbour. It is well worth the steep climb up steps through the shelter of pine trees to the village if only to view the glorious panorama of the harbour and the Ionian Sea and Islands, the closest of which is Onassis’ private island of Scorpios. It is reputed that all those years ago during a rather Retsina fuelled evening at ‘Chicken Bill’s, in Spartakhori playing ‘charades’, Beryl, Neal’s Stepmother, gave an outstanding performance of ‘Blazing Saddles’ by sliding down the narrow cobbled street on her backside!

The seasons here are governed by the coming of the yachties when the charter flights start and so very few if any Tavernas or shops are open before the beginning of May. We can imagine the hell of the packed harbours and the teeming crowds that swarm at the height of the summer and we are thankful for our solitude now in the cool spring surrounded wherever we wander with the vivid colour and scent of lavish wild flowers. 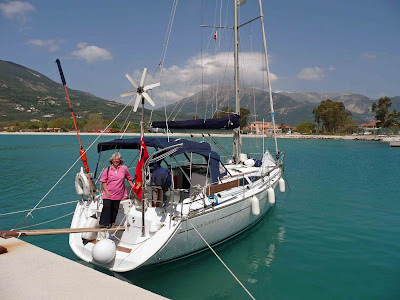 Again for yachties sailing our course in the future water is at a premium and difficult to find and electricity on town quays is nonexistent or turned off until May. There are no berthing charges either and we gather that, even during the high season, the Port Police can be reluctant to collect any fees due. Except in Fiskardo, Cephalonia that is! 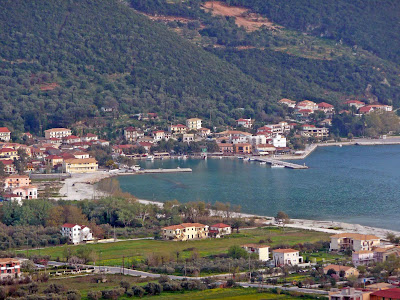 Through the spectacular strait between the precipitous slopes of Lefkas and those of the gentler hills of Meganisi, called the Mevagissey Channel by many a Cornishman, we sail to the southern coast of Lefkas and to the lovely yet somewhat soulless bay of Sivota and to Vasiliki nestling at the head of a spectacular bay fringed by high mountains on the three landward sides. Here we met friends from ‘Bobble’ in Lefkas marina, Debbie and Jeremy who have a house high on the hills overlooking the harbour to which they were kind enough to entertain us for supper. They also fulfilled our wish to see the rugged west coast of Lefkas by driving us along its length stopping off at charming towns and stunning white sand beaches. 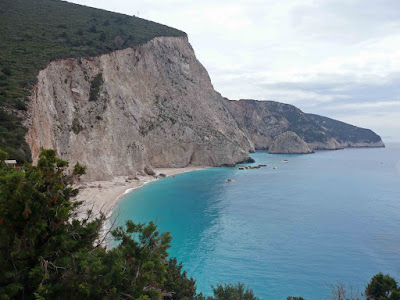 Kefalonia, the largest of the Ionians, is steep - to and, as it is blessed with less rain than its northern neighbours, rugged and rocky. The valleys running down to the sea are forested with the local fir tree, the Kefalonia Pine, a devil for those who suffer from hay fever! Fiskardo is a picture postcard village with original Venetian houses lining the waterfront. This town was not devastated by the 1953 earthquake along with those previous that affected so much of the Ionian as it is built on clay not like others on rock. 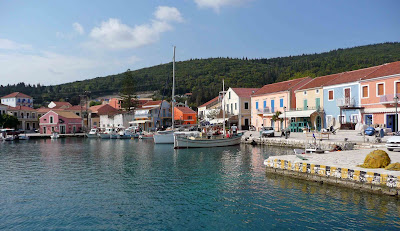 For the sailors, Fiskardo harbour is sheltered and the western quay and western end of the pontoon adjoining have more than three metres depth and water and electricity are provided although not until May. Payment of harbour dues is expected here even in April when we paid 9€ for our one night stay. In fact they charge by the day or part of a day so that one night’s stay equates to two days! 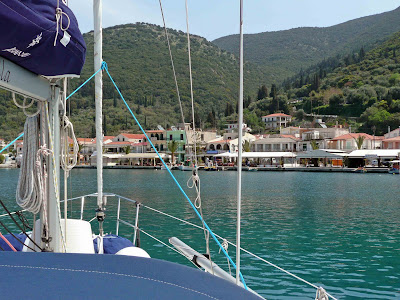 Sami is a large protected harbour and a lively town set within a beautiful backdrop of wooded hills at the southern end of the channel between the island and its neighbour to the east, Ithaca. Water is free at Sami all year round although one has to be inventive with connections if out of season! Parts of the town and adjoining coast were used as settings for the film ‘Captain Corelli’s Violin’. A very kind native of this Island who gave us a lift to an inland Taverna on Neal’s birthday knew the author of the book well and was incensed that the film lived up in no way to the book. Something to do with Hollywood he felt! 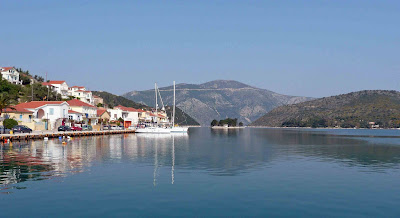 Our final destination in the Ionian was Ithaca, the mythical or not so mythical home of Homer’s Odysseus and the site of Arethusa’s spring although last year we were told that this was in Syracuse, Sicily! The village, Vathi that stands at the head of a nearly landlocked bay has all the facilities a yachtsman could wish for. It was almost completely rebuilt after the 1953 earthquake albeit sympathetically. The approach to the bay through the Gulf of Molo can be less inviting, however, where katabatic winds from the 2500 metre Mount Neritos can lay a yacht on her beam ends as Neal found out all those years ago. 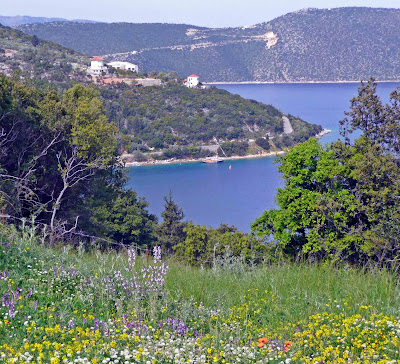 So how did the reality live up to the expectation? Well, the villages may have grown; there may be new quays and more tourists and the memory may have been dulled with age but the Ionians are manifestly the same. We enjoyed our time here anyway.
Posted by Miggy and Neal at 16:03