Forty people of thirteen different nationalities sat down to our traditional English Christmas dinner and enjoyed themselves without exception. Faik, the Komsu Garden restaurateur, his family and his chefs who had learnt so much during the trial run the week before, about which we wrote in the December blog entry, and had prepared so well both in the kitchen and in the dining room that Miggy had less than expected to do although she still had to ensure that the turkey, potatoes and vegetables were neither over or under cooked and make the gravy and the stuffing. 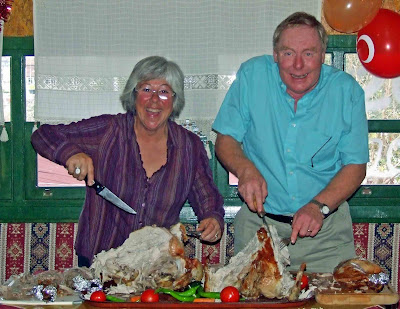 Modern Antalya, our regional capital, with its palm tree lined boulevards is one of Turkey's principle tourist resort and, being only a two hour and £8 return bus ride from Finike, is where we get our culture in the form of opera, ballet and orchestral concerts and where we can shop in superstores for products not readily available in Finike except, of course, pork for which we and most of our fellow liveaboards crave!
On the subject of shopping it is made easy in Turkey as shops tend to be grouped together by their trade or produce much like it has been for millennia in the 'Souks'. 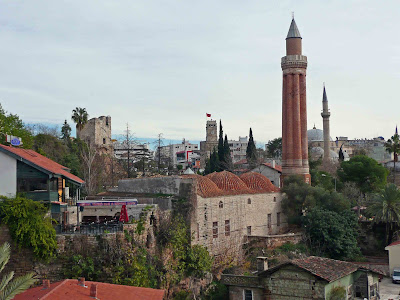 Antalya has been continuously inhabited by the Greeks, Romans, Byzantines, Seljuks and the Ottomans since its founding in 159BC by Attalos 11, a Greek king of Pergamum. It is the picturesque old town or Kaleiçi that holds the most interest with its narrow winding streets and wooden balconied houses provided one can shut one's eyes to the inevitable plethora of tourist souvenir shops touting their junk. The 13th century fluted red brick minaret of the Yilvi Minare Mosque, previously adorned with turquoise tiles has become Antalya's symbol and the Karatay Medrese (theological college) from the same period displays fine Seljuk stone carvings on the portal and mihrap or prayer niche. Much of the old city fortifications still stand and the clock tower, once part of the city walls, marks the upper limit of the original city. A well preserved and renovated and beautifully decorated three arched gate with Corinthian columns was built into the city walls in 134AD in honour of the Emperor Hadrian. The cart tracks through the central arch have been exposed to view. 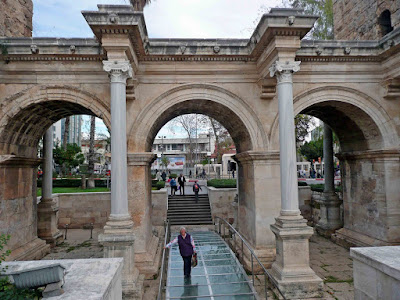 Despite our previous blog comment about 'old rocks' we still enjoy visiting ancient sites and to add to our collection we trampled around the ruins of the city of Termessos first settled by the Solymians in the first millennium BC. In fact they are the same Anatolian peoples that founded Sagalassos about which we wrote in October last year. 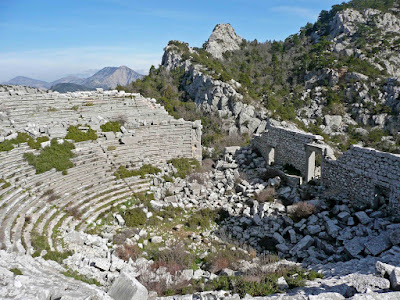 The city flourished in Hellenistic and Roman times and first appeared on history's stage when its formidable natural defences, being on a saddle of ground at 1100 metres between two cliffs, convinced Alexander the Great not to try to take the city in 333BC. Alexander was right; it is a long, steep exhausting climb to the city centre and we didn't even have hostile forces to dissuade us from success! 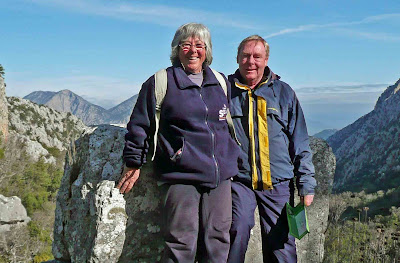 The buildings of Termessos are not as well preserved as many we have seen apart from the theatre with its fine views over Antalya Bay but the setting is magnificent. Termessos is included in the Güllük Dag National park where wild goats and deer and perhaps the only remaining Anatolian lynx roam.
Winter activities continue with regular Sunday barbeques, quiz nights and weekly talks on practical or historical matters. Recently an Historian gave a talk on the civilisations in the Eastern Mediterranean over the last 5000 years. At the Art Club Miggy has ventured quite successfully methinks into portraiture. 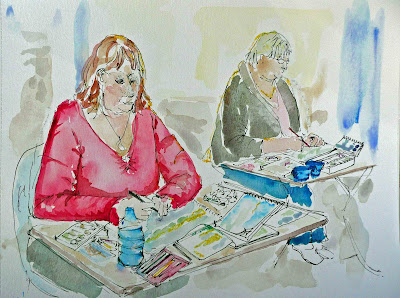 All this carries on in weather that has become quite wet and colder as the snow line lowers on the mountains to the north of us. It is a beautiful scene however and we do still have the warm sunny days in between. 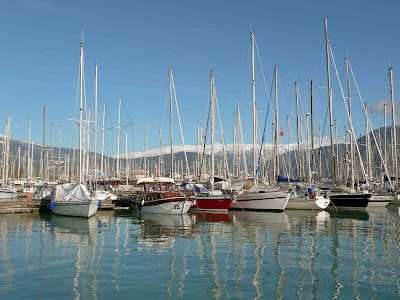