Menorca, the small island of the Roman ‘Insulae Baleares’, lives up to its name as the Windy Island. Since we arrived at the Island on the 16th of May the surplus of the stuff and the swell created by its puff has curtailed our exploration of the place to some extent by sea although we have experienced a sample of the towns, one by bus, and the secluded anchorages.

Interestingly the French word used in weather forecasts for a blow or puff of wind is souffle – nothing to do with soufflé they say!

Another factor that put us off sailing to Ciudadela at the western end of the Island was the forecast of a phenomenon known as the resaca or seiche whereby in certain meteorological conditions the sea level rises and falls by as much as 1.5 metres every ten minutes or so, an oscillation that can continue for several days and make it uncomfortable if not dangerous in the town’s harbour and nearby anchorages. This phenomenon, that nobody appears to be able explain can be experienced along the south coast of the Island and as far away as Palma, Mallorca. 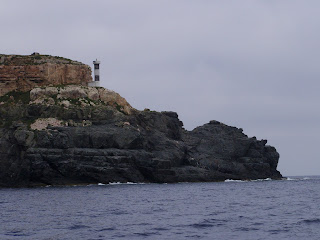 At the entrance to Mahon or, more correctly, Mao harbour we passed La Punta S’Espero, the most easterly point in Spain. The harbour at 5 kilometres long by 900 metres wide is the world’s second largest natural harbour some say, Sydney being the largest. Have they not heard of Poole harbour? It is a very large and sheltered harbour whatever and, bearing in mind its strategic position in the western Mediterranean, it is no wonder that it was fought over by the European powers during the 18th century, the British occupying the Island from 1708 to 1802 with very short interruptions from France and Spain. High on the cliff between Mao and En Castell, the most easterly town in Spain, stands the Georgian villa once the home of Admiral Collingwood, Nelson’s second in command, and on the north cliff across the harbour the beautiful Hacienda San Antoni where Nelson once stayed in 1799. Three Islands are situated in the harbour. The British built a hospital on the Illa de Rey that then became known as Bloody Island and the other two, Illa Plana and Illa Lazareto were used by them as quarantine Islands. Sailing further up the harbour the city of Mao appears as a jumble of attractive whitewashed houses perching atop the sheer cliff faces that grow directly from the deep clear water of the harbour. 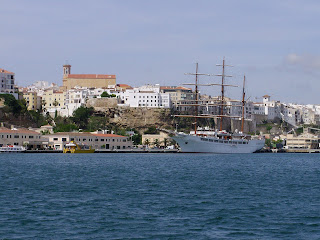 Mao has a British feel reflecting its former government. It still retains some very English elements: sash windows, green shutters and brass doorknockers among them. There is even a Gin distillery here to this very day. The National Geographical Magazine’s description of the Menorcan capital in 1928 as ‘a maze of blinking alleyways leading up and down hill, lined with bright dolls’ houses’ still holds true. It is an enchanting place. 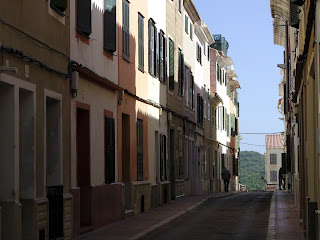 Mao has two major churches. In the Esglesia de Santa Maria music from the mighty 3,210 piped Swiss organ echoed around the dark foreboding edifice. Meanwhile in the Esglesia del Carme the tender strains of Mozart filled the bright yet austere interior. In stark contrast the Beatles were being piped throughout the latter church’s cloisters now gainfully used as the town market.
We moored stern to the harbour Authority’s floating pontoon ‘Isla Clementina’ overlooking the old town. From her we can take the dinghy the short ride to town. ‘Isla Clementina’ has the usual water and electricity on tap but also the luxury of a swimming pool, gardens and a shower! The Port Authority chap comes from Barcelona but its OK his name is Alfonso, not Manuel! 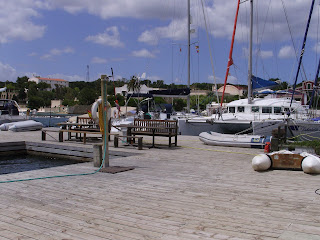 We took a bus through the centre of the Island with its dry stone walled fields alive with the colour of wild flowers and stocked with Frisian cows imported by the British in the 18th century. The terrain is undulating but the hills are low, the highest being Monte Toro in the centre of the Island at 357 metres. Our destination, Ciudadela, was the capital of the Island before the British moved the seat of government to Mao in 1722 because of the superior harbour there. Ciudadela may have lost its power but it retains fine Catalan and Italian styled 16th and 17th century palazzi with their richly adorned facades and an impressive Cathedral with brightly coloured stained glass windows all set in narrow arcaded streets and shady squares. This city of only 21,000 population abuts a small but picturesque harbour. 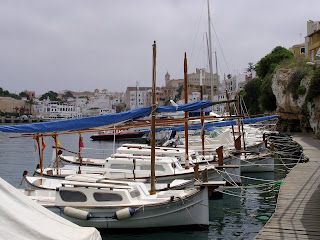 Fornells pronounced ‘Fornays’ is a village of whitewashed houses with 498 inhabitants on the shores of the lovely Cala of the same name on the north coast of the Island. The village is famous for its Spiny Lobster for which Juan Carlos, the King of Spain, regularly sails here from Mallorca to savour. The surroundings to the Cala are of unspoilt natural beauty.

It has suddenly struck me why Menorca seems so much different to the Spanish mainland and to some extent Mallorca and that is the fact that there was only one crane on the skyline of Fornells! Indeed now that I look I can only see two in Mao. 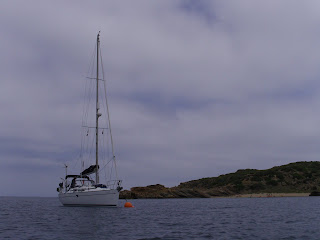 We have anchored in some deserted and unspoilt Calas in sparkling clear water over white sand surrounded by wild flower and tree clad rocky shores. We were fortunate to have this seclusion as in the season we gather that these beautiful inlets are crowded to overfilling with boats and holidaymakers on the beaches. 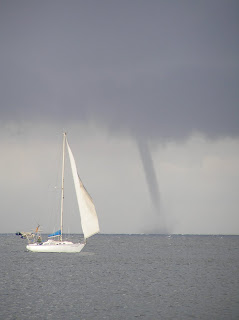 We are at this moment waiting in Mao in gale force winds for an opportunity to sail the 200 miles to Sardinia. Not far to the north of us along the French coast and in Corsica and Sardinia itself it is blowing storm force 10 with 6 metre waves. We reckon, having looked at various Internet forecasts, that we will not have more conducive weather for the crossing until later on this week. Never mind this is not a bad place in which to be stormbound.

A number of things have changed since leaving mainland Spain for the Balearic Islands.

The scenery has become greener and Ibiza, the Roman Islas Pitiusas or Pine Island, lives up to its name with its covering of pine forests extending right down to the cliffs at the ocean’s edge. This is very much in contrast to the baron landscape of the Murcia and Valencia region 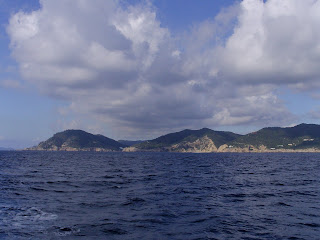 The weather is becoming more settled despite a massive thunderstorm accompanied by hailstones as big as golf balls whilst we were at anchor at the northern end of Ibiza. Generally though the sun shines from a clear sky and it is much warmer, around 28 degrees in the shade at midday. The water has yet to warm up above what Miggy reckons to be freezing: actually about 19 degrees.

We are in a windier area now with the influence of the Tramontana or Mistral, a wind resulting from a northwesterly airflow from a secondary depression in the Golfo de Leon or the Golfo de Genova on the cold front of a major depression crossing France being compressed between the Alps and the Pyrenees and flowing or, to put it more realistically rushing, into the Mediterranean basin. This wind can be dangerous in that in can arrive and reach gale force in as little as fifteen minutes on a calm sunny day with virtually no warning. Fortunately we have not experienced this but the sailing wind is better here than on the mainland and on our crossing from Ibiza to Mallorca, escorted by Dolphins, ‘Bella’ averaged 7 knots on a close reach in 12 to 20 knots of wind. 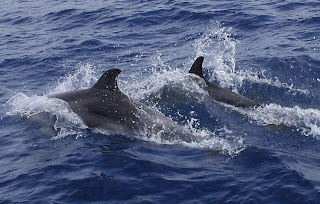 The wind can still be gentle, however, and sailing up the south coast of Mallorca with only the genoa set in 5 to 8 knots of breeze on a dead run was so relaxing until the wind shifted 180 degrees and rose to 20 knots in a flash!

Although the Balearics, and Mallorca in particular, have the reputation of being all that is worst in resort over development, this is generally confined to the proximity of airports and large cities such as Palma, Pollenza, Alcudia and Ibiza. In other areas the coastline is dramatic, beautiful and untouched by tourism with the exception of some small and upmarket resorts.

Mallorca gets its name from the Latin word for ‘major’ of the Roman Insulae Baleares. We landed on its shores at Puerto Andraitx, a place that we liked very much when we visited some fifteen years ago. The harbour sits in a natural amphitheatre surrounded by pine covered hills. The immediate surrounds are more developed, if not over developed, now but the place still holds its charm. Had we bought a small property here, as we had considered, all those years ago it would have appreciated in value by some 2400%. Well you can’t get it right all the time! 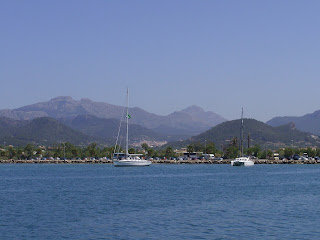 Thanks to Paul and Pauline from the yacht ‘Shellseeker’, cruising friends of like mind who we last met in Viviero on the north coast of Spain over a year ago, Miggy went scuba diving in her newly purchased gear and thoroughly enjoyed every second of it. Thanks both; it was so good to see you again and to spend some time with you. It was also good to see Renate and Hanspeter from the yacht ‘Flamingo’ again. 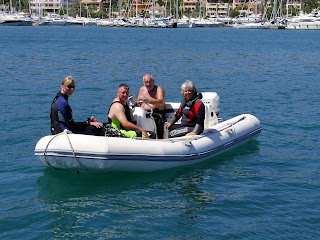 The great joy of cruising these Islands, particularly out of high season, is to anchor in a deserted ‘Cala’, or inlet, surrounded by rocky tree clad cliffs where the sea is azure over white sand and there is solitude and peace. The water is so clear that Miggy swims out to make sure that the anchor has dug in securely. We are looking forward to sailing to Menorca in the next day or so where the ‘Calas’ are reported to be even more idyllic than those of the other Islands.

We are getting into the territory and the time of year when the price of Marina berths increases exponentially it would appear. We learned from a friend in Sardinia that 38 euros (£27) he was paying for a berth in March would increase to 138 euros (£97) in August! We experienced this in Ibiza recently where we grudgingly parted with 55 euros (£39) and it is only mid season! We are learning however and we have discovered Town Quays in the major Ports run by the Port Authority where the cost of a berth is around 5 euros (£3.50) a night. We prefer to anchor when permitted by the weather and our stocks of fresh water and battery power. 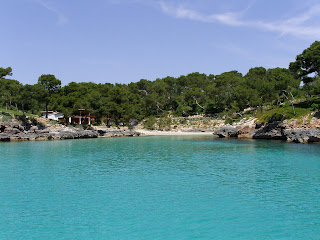 The quality and availability of fresh foods is not as good here on the Islands as it was on the mainland and the price is slightly higher. We can still get a reasonable bottle of Rioja for 2.50 euros (£1.75) though so we are happy. Eating ashore at any half decent restaurant is certainly more expensive than the mainland and one can expect to pay at least 40 euros (£28) a head including wine. We enjoy Miggy’s excellent fare on board and venture out only on high days and holidays. 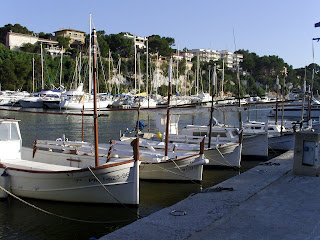 Our Spanish telephone number +34 636 587 556 is operative in these Islands and will be valid until such time as we move on the Sardinia in June. We will advise of our Italian number then. 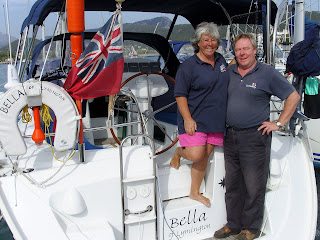 We wish family and friends well and send our love and kind thoughts from us to anyone who reads this ‘blog’.
Posted by Miggy and Neal at 15:04 1 comment: