After 158 days and 1760 nautical miles we find ourselves at Rota, our winter base, at the northwestern tip of Cadiz bay. The marina is very close to the town and is well sheltered except from winter gales from the southwest when, they say, some swell can penetrate the defences. We have a well protected berth and expect not to suffer too much from this discomfort. Much to Miggy’s delight we have a washing machine and dryer on site so no more hand washing for the winter.

We have spent the last couple of weeks getting to know our ‘home’ for the next six months or so. The town has some tourist trade on its fine sandy beaches although this is just about finished for the year judging by the fact that they are removing boardwalks, beach bars and showers complete with drainage and cesspits! Miggy swims every day from one of the fine beaches in a water temperature still at about 23ºC. Yesterday she nearly didn’t return as she found it near impossible to get out of the water because of the undertow of the relatively high waves.

A small fishing fleet sets out to sea each day except Sunday and on its return there is an auction for the trade and a stall for the townsfolk selling fresh fish caught that day extremely cheaply.

There is a US Naval base nearby but the personnel do not appear to be high profile in the town. Their aircraft make a bit of a din sometimes though.

The old town is on our doorstep. It is picturesque with its mandatory church and castle and its shaded squares and cobbled streets house all the local shops, banks and restaurants that we need on a day-to-day basis. The local Biblioteca for free Internet access is also just a stone’s throw away. For more extensive needs there is an industrial park a short bus ride or half an hours walk away that has joinery workshops, a large Ferreteria (ironmonger/hardware store) and two Hypermarkets that will deliver purchases to the yacht. 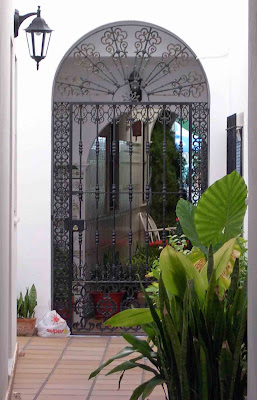 A word about the Ferreteria or ferret around ‘ere as Miggy calls it. This Institution is not just an ironmonger but an Aladdin’s cave hiding anything and everything one would ever need for the house, garden, the car, the shed, the workroom and even the boat.

The local people are friendly and helpful and we are on ‘buenos dias’ or ‘hola’
terms with a number of them that we regularly encounter around the town or in the shops.

There are few British yachts overwintering here at present although more may arrive in October. We are pleased to have met a delightful couple, Leighton Davies and Gwyneth Lewis, who are great company. Gwyneth is Poet Laureate for Wales. Unfortunately they have returned to the UK until Christmas. 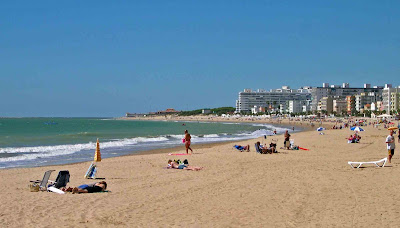 There was a ‘Feria de Tapas’ in the church square for four days during which one swapped coupons, bought at a kiosk, for Tapas selected from six choices from each of six stalls run by a separate restaurants. Each tapas was 1.75 euros and Tapas de dia was 2.00 euros. A wine, beer or soft drink was 1.00 euro. During the evening there was entertainment including Flamenco, folk, rock and puppets! Talking of food we have bought a two ring electric cooker to supplement our electric kettle. We pay for electricity on the pontoon so we may as well use it instead of our camping gaz. Perhaps we’ll invest in a toaster and electric grill as well!

This area is, of course, famous for its Sherry, Jerez being only 20 kilometres way. The Andalucians drink dry ‘fino’ sherry ice cold as an aperitif or with Tapas or, indeed, just as a drink. Of the driest of these Sherries is Manzanilla from the town of Sanlucar de Barrameda at the mouth of the Rio Guadilquivir, the river upon which Seville stands. The local Rota fortified wine is ’Tintilla’ which is sweeter than general. We had a tasting of a number of these wines just for research purposes you understand! 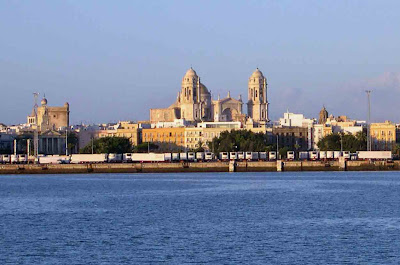 Cadiz is just a 30 minute ferry ride across the bay and the terminal is 100 metres from our berth. We were captivated by the intimacy of the old city that is just 1200 metres by 1800 metres in area. It is so small that we walked around its narrow cobbled streets a couple of times taking in the sites on the way. By far the most striking building is the Cathedral with its twin Torres. The panoramic view over the city, the bay and Rota from the Torre Poniente was superlative. We enjoyed a beer at a café in a cool, dappled square and lunch of Paella in a Restaurant on the street by the Mercado Municipio, the most gigantic fresh fish, meat and vegetable market we have ever seen.

It was astounding to see two separate commemorations of the Battle of Trafalgar in the City. Rather than to mark the heroic victory of Admiral Lord Nelson they were a tribute to the lives lost on all sides, Spanish, French and English.

A plaque above the doorway to a rather magnificent house celebrates the fact that the Duke of Wellington lived here circa 1812. We have no idea why he was here and will endeavour to find out. If anyone reading this knows please tell us by leaving a comment. 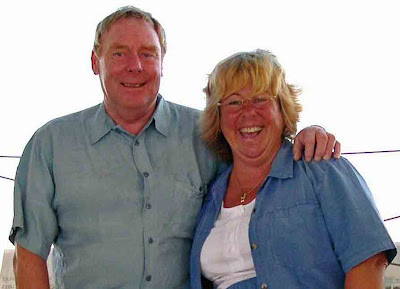 It was great to hear from family including a phone call from Kate Hill – thanks Kate, also our 1st letter since March from Marion Satterley. Emails from Betsy and David, Jane and John and David’ Indian epistles have been much appreciated. We have also been happy to get emails from friends including John and Karin Spink, Ted and Iris Watts, Ian and Sue Burr, John and Annie Cordon and Ken and Jackie Hay. Keep them coming. Hearing your news makes us fell close to our real home.

We have booked our flight home on January the 14th 2007 arriving at Bournemouth International Airport at 2300 BST. This flight and the return on the 21st of February cost us £2.64 each. It is not quite as good as that as Airport taxes increase the fare to £70.00 each return. Not bad still.

A reminder that Miggy’s next broadcast on BBC Radio Solent is on Monday 9th October between 0630 & 0650.

It is reputed that Rota has 3200 hours of sunshine a year. Be that as it may but we feel that winter is approaching. The temperature rarely climbs above 25ºC during the day and 20ºC at night. We have also experienced clouds and rain and sunset is at 2000 European Summer Time.
Posted by Miggy and Neal at 11:49 1 comment:

Yet again we sailed up rivers the first being the Rio Guardiana which forms the border between Portugal and Spain. The blue ribbon of the Rio winds between rounded hills covered with citrus plants, holm oaks and olive groves. The wildlife is abundant with Storks, Heron, Egret, plovers and other wading birds in plenty and splashes of colour from oleanders and wild flowers. We saw Cows and Sheep for the first time for months.

Some fifteen miles up river we dropped the anchor in midstream between the whitewashed houses of the tiny villages of Alcoutim on the Portuguese side and Sanlucar de Guardiana on the Spanish side. We did not know which courtesy flag to fly and even the mobile phones were confused as to which country they are in.

This part of the world was going through a heatwave with temperatures of 35ºC in the shade on the coast but inland it reached 39ºC during the day and no less than 30ºC overnight all in humidity between 70% to 90%. We sweated and one night resorted to sleeping in the cockpit.
One of our infrequent meals ashore was in a local Alcoutim Café and deserves mention. After sardine pate and chunks of bread, Miggy had ‘Bife a café’, a traditional dish of thin steak with a creamy sauce served with chips and topped with a fried egg and Neal had ‘Bacalhau’ with chickpeas. Bacalhau is salt cod and is eaten in plenty in Portugal. They say there are 365 ways of cooking Bacalhau, one for each day of the year. This fayre, together with a litre of Vinho Tinto de Mesa, mineral water and coffee, cost us the princely sum of 17 euros (about £12). We have enjoyed sampling food and wine that is traditional in the country or region that we find ourselves, and Portugal has its share of good food in addition to sardines and tuna. Its wines are much underrated and not limed to the sparkling Mateus Rose however nice that may be taken chilled at lunchtime. There are rich, fruity red wines from the Douro, Dao and Alantejo regions as well as the bone dry, young and slightly sparkling ‘Vinho Verde’ from the Minho region. Then of course there is the Port. 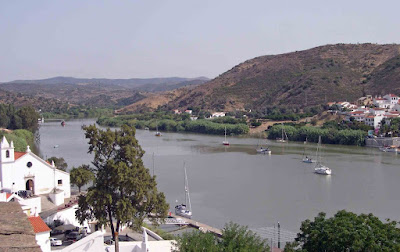 Miggy has a creditable and usually successful attempt at cooking local dishes. The salt cod Bacalhau was not one of those successes in that it turned out very tough and extremely salty. She had soaked the fish for two hours whereas, as we later discovered, it is customary to soak it for two days! Neal thinks it was a deliberate ploy to go for a meal ashore!

We came across Steve Mehlman’s villa on our way up the Guardiana with his schooner ‘Siesta Key’ moored outside proudly displaying the burgee of the Royal Lymington Sailing Club.

It was wonderful to have Miggy’ old friend Jill and her husband, Brendan, visit us on Bella at Ayamonte having driven from their holiday villa at Sagres some 200 kilometers to the west. 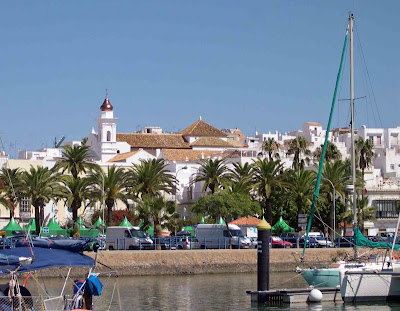 Our next river was the Rio Piedras and the tiny holiday village of El Rompido reserved, it appears, mainly for the Spanish tourists. The marina there is new and sparsely populated but the management were friendly and helpful. We spent one night at anchor in the river which is separated from the sea by a strip of sand dunes upon which people picnic. The trouble is they leave their rubbish in plastic bags under the signs that say ‘National Park’ when they go home. They even leave cheap picnic tables, chairs and umbrellas. Who do they reckon will clear it up? We can tell them – it is the seagulls that rip open the bags, eat what they can and leave the rest scattered for the high tide to wash away and litter the sea. 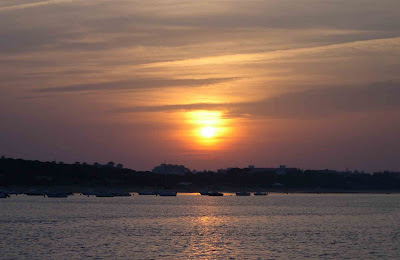 At the next port, Chipiona, we witnessed the Fiesta of the Virgin de Regla. She is a black saint established by the Church to attract ‘pilgrims’ and swell their coffers! How could I be so cynical? The fiesta also marks the end of summer.

Talking of the end of summer, the number of visiting yachts plying this coast is dwindling as they head for their ports of refuge against the winter weather, which can be fierce in these parts. We too have hung up our sailing boots in the marina at Rota at the northern end of Cadiz bay. We are lucky to have booked our spot a month or so ago as berths for the winter are at a premium. Rota appears to be a convenient and friendly town with all the facilities that we need for the winter and great travel links with the places we intend to visit during the winter months such as Sevilla, Granada, Jerez and Cordoba. But more of that later.