It was on our ‘crystal’ wedding anniversary that we sailed from Vathi in Ithaca to Patras to start our passage through the Gulfs of Patraikos and Korinthiakos, the narrow seaway between the Peloponnese and the Greek mainland, to the Corinth Canal. On the way we would see the longest suspension bridge in the world built in 2004, ancient Greek Delphi, the 19th century Kalavryta rack and pinion railway and finally the Corinth Canal.

Patras itself is a relatively modern concrete town with little to interest us although the Marina at 30 euros a night, electricity and water included, and over five kilos of laundry washed and dried for only 10 euros, is convenient to start the passage east. We also had an excellent and good value anniversary meal in town at an authentic Greek restaurant. 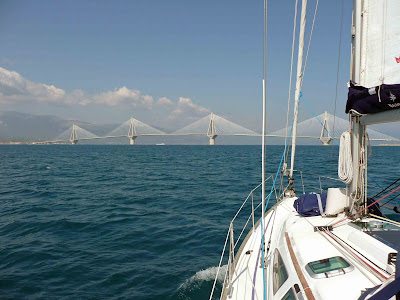 Less than five miles after leaving Patras we sailed into the Korinthiakos Gulf and passed with awe under the enormous but nonetheless beautiful Rion Bridge, the longest cable stayed bridge in the world at 2,252 metres and a maximum air clearance of 45 metres. The wind funnels through this narrow strait with high mountain ranges either side to give quite exciting sailing all the way to the tiny island of Trizonia some twenty miles to the east.

Trizonia is a gem and despite the sunken or abandoned boats that litter the quayside, the harbour is sheltered and has a bizarre charm. Nobody bothered us for mooring fees and the water is free. The village on the waterfront with its relatively large church is quaint although it has four open Tavernas; more than were open in Kefalonia and Ithaca together! The only and wonderfully fresh crusty loaf of bread at the tiny supermarket had what we thought to be an Easter cross moulded into the top. We were delighted with this find but had our wrists slapped by the assistant who told us it was the holy bread for communion today, the Orthodox Good Friday. Greek Easter is the foremost religious event of the year and an important holiday. We watched the midnight candlelit procession from the church into the main square from a Taverna in the square over a beer after which fireworks were set off; not what we are used to at Cowes or the Olympic Games but perfect for this place and this occasion. 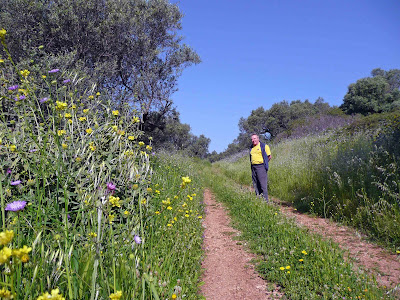 The most wonderful walk around the island, measuring no more than one and a half miles by three-quarters of a mile revealed an enormous variety of beautiful wild flowers including two species of wild orchid. Views to the nearby Peloponnese over the white capped waves of deep cerulean water roughened by the strong westerly wind matched the snow capped peaks of the mountains stunningly set against the bluest of blue skies.

Onward to the east the narrow inlet on which the town Galaxidi stands is spectacular with a waterfront lined with classic Italianate buildings and set against the backdrop of the 2500 metre snow capped Mount Parnassus. 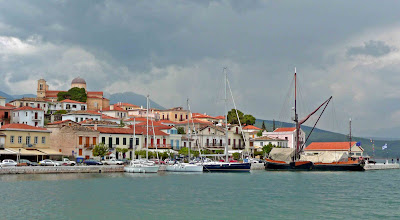 The small town with its narrow cobbled streets is normally a tranquil place but that tranquillity is interrupted at times by Athenians for whom Galaxidi is a mere two hour drive away. Easter is one such occasion but they left late in the day to give this town back its serenity. For those following in our wake the Port Police are reluctant to collect berthing fees, none knows how much should be charged for electricity so we were asked to donate what we felt appropriate and the water is 5 euros a day, potable but virtually undrinkable.

It was from Galaxidi that we caught the early morning bus to visit Delphi. 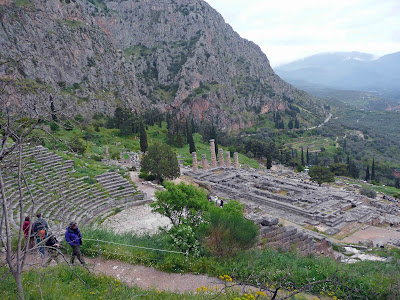 Legend has it that Zeus dispatched two eagles from opposite ends of the universe and declared the site on land below their crossing point in the sky the centre of the world and named that place Delphi. Located spectacularly on a series of terraces on a precipitous slope in the foothills of Mount Parnassus and flanked by the sheer faces of high rock slopes, the Phaidiadres, Delphi was renowned from the 8th century BC as the home of Apollo. People came from all over the ancient world to consult the oracle, a priestess who mouthed the advice of the god Apollo, albeit often ambiguous. The sanctuary continued in the same vein until the arrival of the Romans in 191 BC and the oracle was abolished in AD 393 with the rise of Christianity in the Byzantine Empire. Spoilsports! 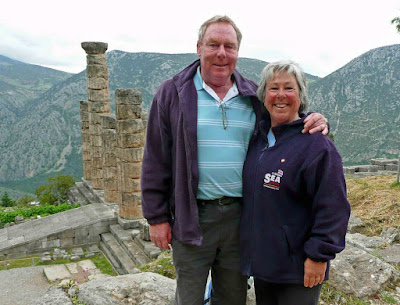 The massive Temple of Apollo and its alter for ritual slaughter are the centrepiece of the sanctuary and stands in the middle of the site surrounded by temples devoted to other gods, treasuries, stoas (markets), meeting halls and council chambers. The main street, the ‘sacred way’, leads to Apollo’s temple and onward to the 5000 seat theatre which, although grand, in no way rivals the theatre at Epidaurus! An exhausting steep climb onward up the hillside is the Stadium where the Pythian Games were held. These, after the Olympic Games, were the most important sporting event in Greece and served, as did the Olympics, to bring together the otherwise divided rival city states. Delphi in its magnificent setting does have the atmosphere of long gone days of an ancient civilisation. We are so glad to have visited the place in the cool of the spring and early in the day and we can only imagine the how insufferable it would be with hoards of tourist in the heat of midsummer.

To find a berth in Corinth Yacht Harbour amongst the many local craft is a problem but berthing is free as is good drinking water. 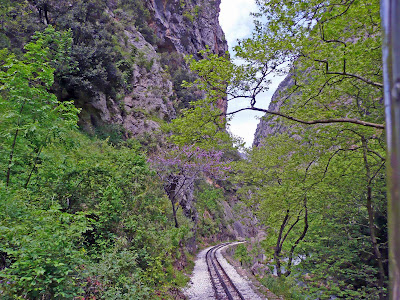 We rose to an early alarm to catch the train from Corinth towards Diakofto where the 22 kilometre Kalavryta to Diakofto rack and pinion railway starts. It was built between 1889 and 1896 by an Italian company to bring ore down to the sea from the mountains. The engine relies on a third rack and pinion rail for six miles where grades can be up to I in 7. It is a magnificent feat of engineering, the track weaving through tunnels, over bridges with a gushing river below and hanging precariously on the steep sides, some of which overhang the track, of the Vouraikos Gorge. It was an impressive journey and one that will form a lasting memory.

Only a mile away from Corinth Yacht Harbour lay the entrance to the Corinth Canal. We, together with ‘Jasmone’ with Peter and Ruth aboard were two of four yachts astern of a coaster going through the six kilometre long canal. With the help of a 1 knot current the transit time was just half an hour. Formalities were easily completed at the eastern end, Isthmia, but they hurt at 130 euros! 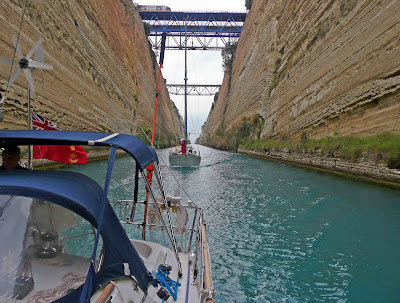 The Canal construction was started by the French and completed by the Greeks in 1893 although Emperor Nero dug the first trench back in Roman times in an endeavour to avoid having to drag ships across the isthmus on a paved road as had been the custom for time immemorial. The dimensions of the canal at 24 metres wide by 7 metres deep limit its use to small ships and yachts. It is underused therefore with modern container ships, bulk carriers and cruise ships having to go south about the Peloponnese. The weekly closure on Tuesdays to carry out repairs to the crumbling limestone sides seems not to be effectual and one wonders how long the canal will be cost effective to run despite its high charges.
The passage through the canal gazing ever upward at the 79 metre maximum high limestone walls is impressive although the occasion was less momentous than we had envisaged beforehand. In fact it was more imposing to look downward from the road bridge, as we had during our whistle-stop tour of Greece, than to peer upward from the boat.

The Patraikos and Korinthiakos Kolpos behind us we now find ourselves in the Saronikos Kolpos about which and much more later.
Posted by Miggy and Neal at 07:18 No comments: