Last of a Finike Winter

We trust that our homecoming at the beginning of March will be greeted with the onset of spring and more settled and warmer weather than we have had here in Finike of late. The local townspeople tell us that they need the rain to bring on the tomatoes and citrus fruit but surely not in the amounts that have poured down upon us since the beginning of the New Year. Wind from the quadrant south to east even if it is blowing hard offshore but not inshore brings with it a significant swell that penetrates the marina giving an uncomfortable motion on Bella. Whilst conditions are not dangerous the movement makes the environment on board inconvenient and somewhat wearing. We do, however, have beautiful, warm, sunny days to compensate for all this.

Our Turkish visas expired during February thereby occasioning a trip from Kaş on the Turkish mainland by ferry to the tiny Greek island of Kastellorizon. It was great to revisit one of our favourite haunts in the Mediterranean made even finer by a superb pork steak for lunch! 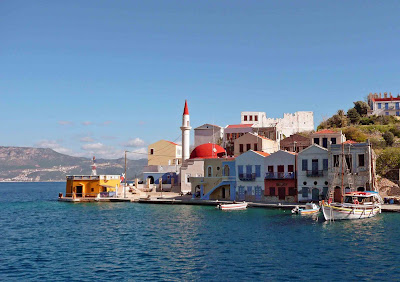 To widen our cultural experience we witnessed Camel Wrestling in Demre! This activity is an ancient tradition with origins in the Middle East where nomadic tribes pitched their bulls against one another as a competitive sport. We believe that the contests may have also been used for the practical reason of finding the strongest bull to service the females thus ensuring a strong lineage of working camels. We have no authority to substantiate this however. 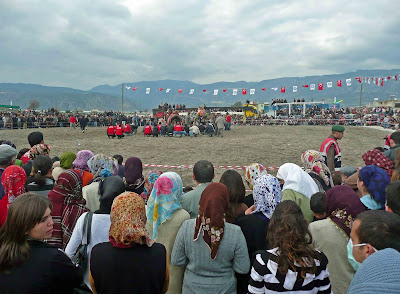 Camels used for wrestling in Turkey are of the Tülü variety, a cross breed that are bulkier and longer haired than the slender, long eye lashed cousins that we encountered in the Sahara desert. The camels are decked out in their finery with elaborate wooden saddles and richly embroidered blankets.
The annual contest held in the mating season attracts a huge high spirited but good humoured local crowd, also in their Sunday best, sat cross legged on the ground, standing or perched on their trucks around an unprotected arena. The atmosphere is of the occasion is enhanced by the market and food stalls that surround the field of battle.

The sight of camels wrestling one another would seem to promise some spectacular action but in reality these animals are gentle and prefer the art of persuasion above that of fierce combat and the wrestling is more akin to comedy than blood-sport. 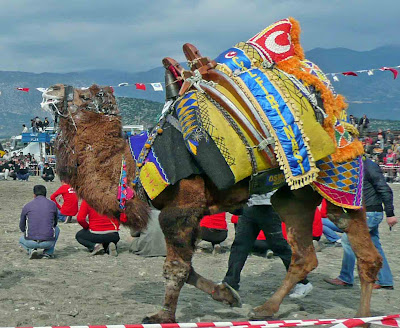 Two bulls are led into the arena and a young cow is paraded around to get them excited as evidenced by streams of viscous milky saliva issuing from the bull's mouth and nostrils. Mostly the two bulls half-heartedly butt each other shoulder to shoulder and lean on the other until one of them gives in and runs away. This is the really exciting bit as the bull will often charge off towards the crowd, with the conquering bull in pursuit, and the spectators scramble hurriedly out of the way. The antics of spectators trying to avoid a thousand kilograms of camel running towards them can lead to pure comedy and the biggest crowd reaction. Miraculously there are few accidents to camel or human. Occasionally two bulls will get down to it and actually try to wrestle one another, feinting in here and there, eventually locking a fore-leg inside the leg of the opposition and leaning on him to topple him over in a dromedary's version of a wrestling fall and pin. Large bets are wagered by owners and spectators alike, though how you tell just which camel won can be difficult to determine; both bulls may run off simultaneously or merely refuse to get involved at all. We hear that the judges award points for style however and the winning camel's owner receives another blanket! 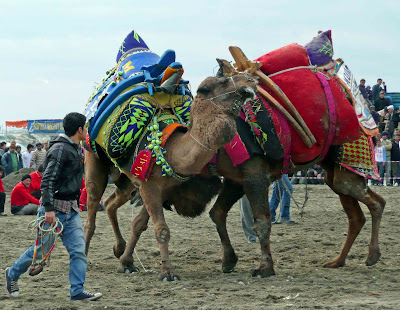 Bella's bottom has been sanded down, primed and painted with three coats of antifoul and her topsides polished and she looks as eager as we are to set off on this season's adventure. We intend to sail west and north along the Turkish coast as far as Ayvalik taking in the Greek islands of the northern Dodecanese and eastern Sporades on the way. We will cross the Aegean to the western Sporades, sail south down the Evvia gulf into the Saronic, transit the Corinth canal and spend the winter in the Ionian Islands. 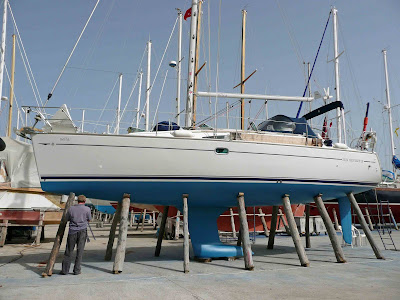 For those of you who may winter in Finike marina in the future we can say without a shadow of a doubt that those in the yard who were involved in hauling us out of the water, propping us up and launching us were the most professional and careful that we have experienced during our sailing careers over the past 35 years. The hoist strops were tied together and were place exactly in line with the lifting marks on the hull. We were transported gently the few metres to our hard standing and 14 props, each measured and placed precisely symmetrically, were wedged to support us. In the UK we were lucky to get 7! For a euro each the yard will move the props so that the antifouling coats can be complete without leaving patches that have to be painted just before launching only to wash off as soon as the boat goes in the water. The yard even supplied a sturdy steel ladder and proper steel framed wheeled staging. 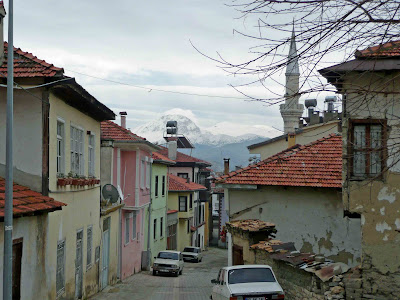 Our final visit of the winter was to Elmali, a market town 60 km from Finike up in the hills. At an elevation of about 1200m the temperature was 15°C than on the coast. Amongst the bland concrete buildings are scattered beautiful Ottoman houses and there is a covered market that, although smaller than Finike, is full of atmosphere like the town itself which is truly Turkish. Miggy's artistic skills are coming on apace as can be seen from the watercolour below of a Turkish summer picnic.
We look forward now to seeing family and friends during our stay in the UK from the 5th March until the 25th April which will include a week in the Scilly Islands with Miggy's Mum and her close family to celebrate an important birthday.
Posted by Miggy and Neal at 16:03 1 comment: