How incongruous to be woken at 0800 to the faint and distant strains of the ‘Star Spangled Banner’ as I believe the US National Anthem is called. Reveille American Navy style I guess.
It has been a week or two of celebration from which we are endeavouring to recover. The culmination of those celebrations was yesterday, the 13th of October, with a very excited Miggy opening birthday cards and presents from Mum and Dads, Sue, Johnny and family and Jane, John and family and cards from Marion, Joan Goulding and Lorri, Jim and family. She is so grateful to all of you and will send thanks in a more traditional way than this blog, Spanish Correos permitting. We will celebrate tonight with a meal ashore of a local dish, Carne y Patatas de Andalucia (Meat and Potatoes Andalucian style) that we had to order yesterday to allow the chef time to prepare. Earlier this week we were delighted to welcome Jane and John aboard for the night. They arrived with John’s mother, Mary and Stepfather Peter at lunchtime. We enjoyed an afternoon of superb company under blue skies and sunshine and an extended lunch washed down with various beverages including a delicious cold Manzanilla, a very dry, salty, sherry from Sanlucar de Barrameda, a town 20 kilometres north of here. Later in the evening, after Mary and Peter had left to drive back to their home outside Sotogrande, Jane and John were kind enough to treat us to a delightful dinner at El Sixto in town here in Rota. The following lunchtime we were thrilled to see Clare and her boyfriend, Richard, who, after lunch, drove John and Jane back to Sotogrande. 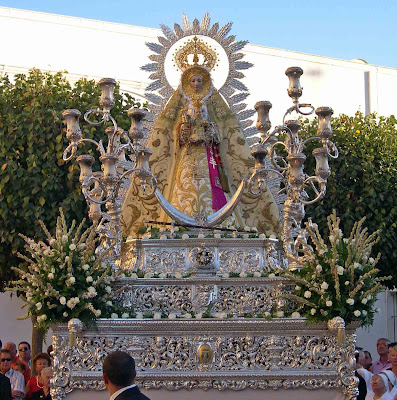 During the previous week we were honoured to witness the Fiesta de Patronales de Rota, the town’s celebration in honour of their patron, La Virgen del Rosario. The week’s festivities started with the coronation of la Dama Major (the fiesta queen) and the swearing in of her Corte de Honor, a guard of honour comprising twenty beautiful young ladies and a number of children as pages. There was a parade with the girls in traditional dress on magnificently decorated floats, from which they were removed at the end by way of forklift trucks. Later the girls were paraded around town in somewhat more comfort in horse drawn carriages. After evening concerts, poetry readings and various children’s activities the fiesta concluded on a religious theme with the solemn parade of the effigy of the Virgen accompanied by town bands, the girls, the town dignitaries and representatives of local associations and organisations. The life size dressed statue of the Virgen together with silver candlesticks and ornamentation on a heavy silver or silver gilt platform measuring about two metres by three metres is carried by twenty strong young men at ‘shuffle’ pace around the town for three hours. To get the effigy out of the Church they had to shuffle on their knees to clear the arched doorway. When they stood up their burden toppled and raised a gasp from the exceedingly sizeable crowd. 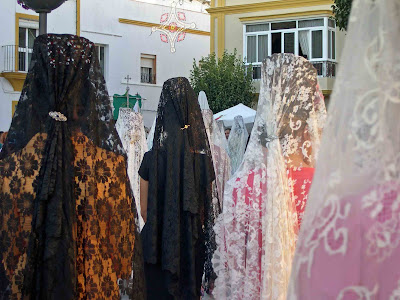 We visited the town of El Puerto de Santa Maria that stands n the shores of the Bay of Cadiz about a half hour’s bus ride from Rota. It is a town that once burgeoned as one of the main ports for the export of Sherry. A number of Sherry companies, including Osborne and Terry, still have Bodegas there. The Plaza de Toros is one of the largest and most famous bullrings in Spain and, among the Town’s other sights, are the 13th Century Castillo San Marcos, the old Fish Market and a small building on the river that housed the water supply for ships voyaging to South America in the 17th Century. Our greatest sight was the renowned shellfish eating house, ‘Romerijo’. The restaurant straddles the road on one side of which they serve boiled shellfish and on the other side deep fried. One buys portions of the incredible array of type and size of shellfish and conveys them in paper ‘cones’ to a table at which cutlery, plates, condiments and a large receptacle for disposal of shells are provided. One orders drinks from the waiter and then tucks into a feast! The place is packed. 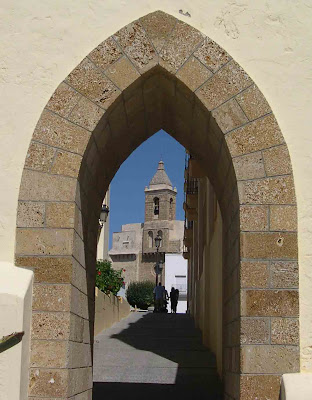 A striking feature of Rota and, indeed, the rest of Andalucia, is the ‘Patio’. Many houses are built in the classic Mediterranean and Moorish style where the courtyard or patio is at the heart providing light and air to the surrounding living and sleeping accommodation. Whilst many of the houses are now subdivided into apartments the patio survives with its whitewashed walls, citrus trees and terracotta pots filled with geraniums and carnations. Jasmine fragrance adds to the atmosphere. The Andalucians and, indeed, the Rotarians (yes, that’s what they call themselves) take great pride in their Patios be they palatial spaces in the grandest residences or the tiny courtyard in humble homes, shared by many. 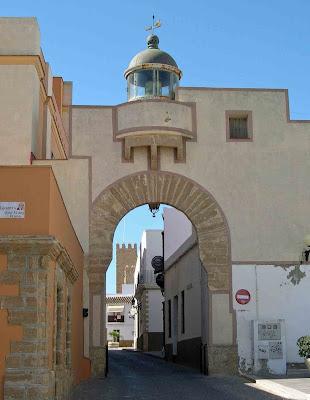 Hasta luego and love to you all until the next time.
Posted by Miggy and Neal at 09:43 1 comment: