If you wish to protect endangered species and establish a Maritime Park to do so you have to be serious about regulating the use of the area and policing it. The only such Park in Greece, the Northern Sporades National Maritime Park, established to protect the endangered Mediterranean Monk Seal and other species, is not so regulated or policed. 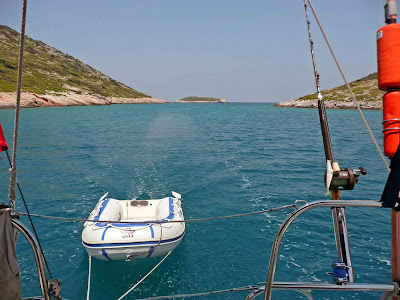 After a good sail from Ay Efstratios we dropped anchor in the deceptively idyllic landlocked bay of Planitis on the island of Kira Panayia or Pelagos.  It is no wonder that the last monk seal seen in the area was 15 years ago considering the far from clean water we found in Planitis and the behaviour of large motor cruisers who open their garage doors and disgorge jet skis to buzz around like a swarm of flies for hours on end disturbing not only the wildlife but everything else in the surrounding area including us. It is a shame that someone has not invented a bloody great fly swat that can eliminate these vermin with one swipe.

Not a glimpse of the whales and dolphins that are supposed to be here in their numbers but we did have the pleasure of seeing the rare Eleanor's falcon, one of apparently 80 species of bird in the Park and the goats were entertaining. 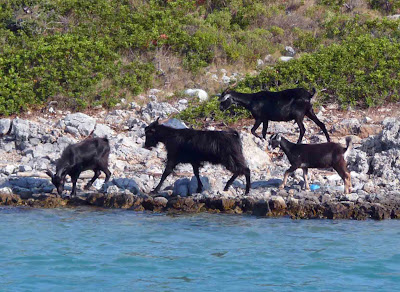 The Seal Rescue Centre at Steni Vala on the eastern coast of Alonnisos, a delightful little port and village, with which we fell in love, is a derelict hut that probably died at the same time as the last monk seal.
Alonnisos, along with the other Islands of the Sporades, has a lush landscape and undulating pine clad mountains contrasting vividly with the barren and arid rocky islands groups such as the Cyclades. Abundant springs and rivers water the fertile fields and orchards of the interior of the islands to create agricultural self sufficiency and wealth. Tourism has flourished since the 1960's when the rich and famous came, some in their yachts, to savour the deserted beaches of Skiathos, Skopelos and Alonnisos.  Now the Sporades, Skiathos in particular, have to cope with plane loads of holidaymakers and the likes of us poor yachties! 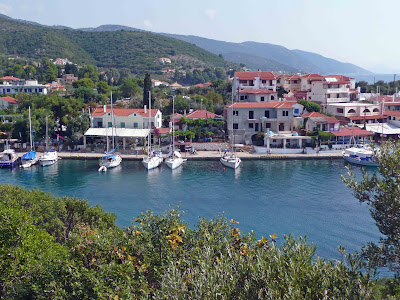 The Islands are known to have been colonised by the Minoans as far back as 1600BC who introduced vine and olive cultivation. Being further north and west than the other Aegean island groups there is perceptible evidence of the long Venetian occupation.
Patitiri, the capital of and ferry terminal for Alonnisos, replaces the former Chora, now a pretty village clinging to the hillside above the town. We berthed by lunchtime but by the early evening two lady Port Police officers told us to move from our berth to make way for some large motor yachts. Somewhat upset at this and in the absence of an alternative comfortable berth we decided to travel the 7 miles to Limin Skopelou on the island of Skopelos where we were fortunate to find a comfortable berth in what can be an overcrowded port. Said motor yachts came in to Skopelos the next day. Our guess was that one was carrying some Nob or the other and that the other three were guard boats. 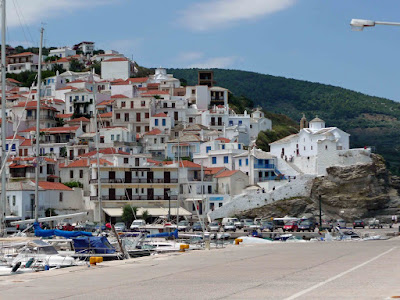 The Port Police at Patitiri did us a favour in prompting our move to Skopelou as at about 0400 all hell let loose with gale force winds and 55 knot gusts. We are sure that our berth at Patitiri would have been untenable in these conditions.  There was great activity among the crews of the many yachts berthed here securing extra shore lines, deploying additional fenders and taking up on anchors or rushing about with varying degrees of disfunctionality. We were fine with 40 metres of scope out in 5 metres of sticky mud although our aft boarding plank which was stowed at 45° to the horizontal blew vertical toward the boat and took out a blade from Wendy, the wind generator. Wendy was upset at missing one of her best chances to pump 10 to 15 amps an hour into our batteries that she literally threw a wobbly to the extent that she was about to shake herself and the boat to bits until we managed to calm her by disabling her rotation. When the wind died we admitted her to hospital and made her blade assembly complete with the spare that we carry. 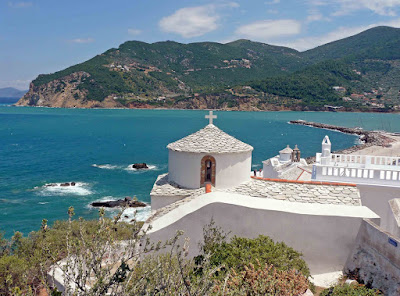 Skopelos town, small as it is, has 123 churches or chapels within its boundaries. Sporadhan town houses with flower filled wooden balconies and fish tail slate tiled roofs line the maze of narrow cobbled streets intricately inlaid with sea pebbles and shells. We like the place. We retraced the steps, literally, up to three chapels and the ruins of the Venetian castle that Miggy had taken 25 years ago.
Despite a goodly breeze and a forecast of locally F6 which we thought would be east of us we had a great sail to Loutraki on the west coast of Skopelos which became a bit lively with strong gusts and big wind shifts. We berthed stern to on the visitor's pontoon and watched a Sunsail flotilla tie up on the other side under the skilled instruction and expertise of the young flotilla leader. This guy really knew what he was doing. Not a half an hour after his flock were secure the pontoon on which we were all moored came adrift from the shore. Not to a great extent did it move as it was held to the sea bed by chains and our anchors but enough for the Port Police officer to order us to move. So for the second time in a few days move we did, not to elsewhere in the harbour as we did not favour the alternatives, but to Skiathos town just 6 miles across the water. 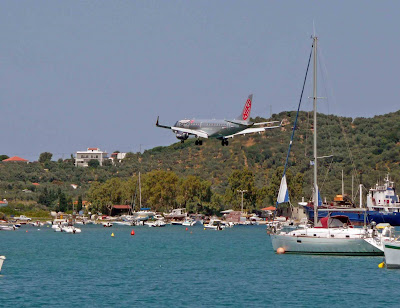 The anchorage at Skiathos is limited by the restricted area under the flight path to the airport runway which was just half a mile from us. The town quay and pontoon are extremely busy with a melee of charter yachts, large motor cruisers and day trip boats so we are pleased to be away from it all in relative peace and to observe the mooring frolics. At night however our peace was shattered by a disco kind enough to share their 'music' with us and everybody else in the northern hemisphere until 0530. We would have preferred it had they kept their cacophony to themselves! Skiathos town is a pretty place with its cobbled streets and fine mansions but it has been overcome by tourism with all the baggage that entails. How so many tourists can be packed into such a small island defies belief but they come in their thousands each day by endless ferry movements and aircraft. 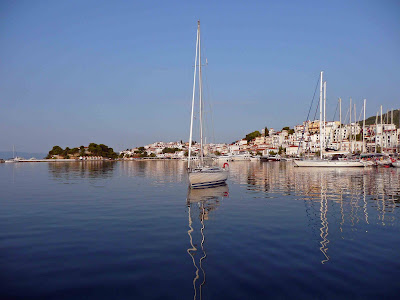 What a difference a day can make! From the noise and bustle of Skiathos town just five hours later we found ourselves moored to the quay in the only hamlet on the island of Palaio Trikeri or Virgin Trikeri measuring less than 2 miles long by 1 mile wide. We can find no explanation as to where the Virgin bit came from but the island does have 70,000 of the estimated 150,000,000 olive trees growing in Greece. So perhaps it is something to do with olives. It is an idyllic and typically Greek place with small balconied houses fronting the waterfront of the tiny bay. A few rather smart holiday villas are dotted amongst the pine and eucalyptus on the hillsides and there are two Tavernas. A tractor is the only motorised vehicle on the Island. There is not even a motor scooter, the land borne equivalent of the Jet Ski, which, being rampant and utterly irritating in this Country, should be dealt with the by the aforementioned swat.

We have enjoyed our short stay in the Sporades Islands. Despite some setbacks, Steni Vala on Alonnisos, Skopelos and the tiny Island of Palaio Trikeri have given us great pleasure.
With the season passing so swiftly we now, in the middle of July, move on to the Island of Evvoia about which we shall blog in due course.
Posted by Miggy and Neal at 10:44

Hi, I am the owner of the blog of photography http://photographymc.blogspot.com/

I have added in the favorite, your blog is really beautiful and useful compliments ;-)

Tell me what do you think.

I love it when your angry Neal your writing makes me laugh lots!!Hilly

lovely to read about how you are doing. hope it is not too hot for you and the holiday season not too busy
Lots of love Jane and John