With the Sporades behind us to the east the next leg of our journey was to take us south down the Gulf of Evvoikos along the western coast of Evvoia and into the Saronic Gulf.
The chequered history of Evvoia from Macedonian rule in 338BC to Turkish government in 1833 has left a range of religious cultures from Greek Orthodox and Islam to the descendants of 15th century Albanians who still speak their own dialect of Arvanitika. Immigration clearly remains a problem with the influx of Indian, Pakistani, Bangladeshi and eastern Europeans in significant numbers evident on the Island; undoubtedly an illegal back door into Europe. 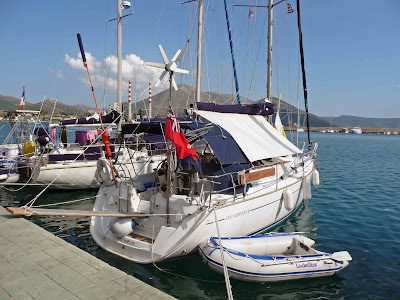 Evvoia is Greece's second largest island and its scenery varies markedly from the fertile green valleys and pine covered mountains of the north, reminiscent of the Sporades, to the barren rocky landscape of the south echoing that of the Cyclades.
A Greek mainlander remarked to us that 'Evvoia is different'. It is and on the whole we were unimpressed with the Island. This may be a jaundiced view as we saw just the coastal strip, being unable to explore inland as car hire was unavailable in the limited number of places that we felt comfortable about leaving Bella for any length of time unattended. 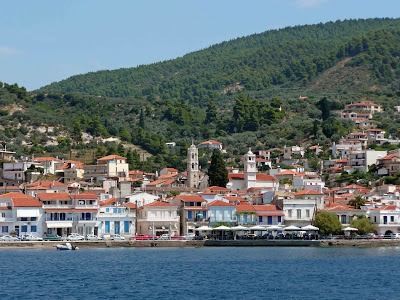 Apart from the small ports of Limni, a wealthy 19th century seafaring town with character and charm and Karavos, where we had our seawater pump rebuilt by a tractor dealer who dabbles expertly with marine engines, the towns along the coastal strip were uninteresting bottom of the market tourist resorts mainly frequented by Greeks on holiday or on day trips from the mainland served by a disproportionate plethora of car ferries. Even Eretria, the site of the important ancient city state, ranks among these easily forgotten places although we do remember its anchorage and the extreme discomfort therein due to the wash of constant large roro ferries driven too speedily by lunatic so called professional masters whose grasp of seamanship is nonexistent. It is my belief that these 'drivers', like the majority of young and middle aged Greek men have their brain cells lodged, by some quirk of nature, in their testicles such is their excess of testosterone. 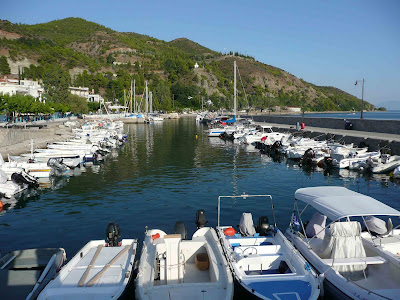 Chalkida, the noisy dirty capital of the Evvoia, is hardly worthy of comment in this blog except on two accounts, its road bridge and its tides. A bridge has spanned the narrow fast flowing Euripus channel separating Evvoia from the mainland since the 6th century BC. Legend has it that Aristotle was so frustrated at being unable to fathom the ever changing current flowing under the bridge that he threw himself off the bridge into the current that perplexed him so much and drowned. Quite clearly Rod Heikell, author of the Imray Greek Waters Pilot, is also confused by the tides here. Contrary to his statement that there is no tide flowing through the berths on the east quay it flows like the spring ebb in the Needles channel.  Perhaps god Rod should do the honourable thing and follow Aristotle's example, metaphorically speaking of course; we would wish him no harm. This is just one of the many significant discrepancies in Heikell's work. Although we gather that a new edition of the Imray pilot is imminent, yachtsmen cruising Greek Waters may be better served with the Greek Pilot 'Greece – Sea Guide' published in four volumes. These are expensive but superb with detailed charts and excellent pilotage notes in English as well as Greek. Alternatively there is a series of Greek charts with excellent harbour plans and pilotage notes in English. 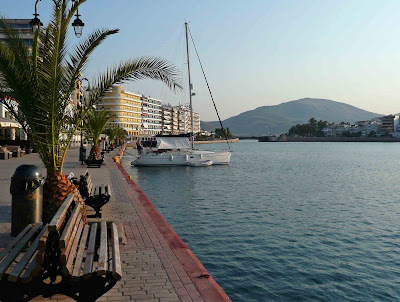 Once one has located the Port Police office that deals with bridge opening, one of four Port Police buildings and tucked away in a back street without a signpost, one has to establish, with some difficulty it must be said, whether or not the bridge will open that day. It has scheduled closing days during the summer and in addition unscheduled days due to understaffing, strike or pure laziness. We had to make four or five visits to the office involving a long walk in the sweltering heat to finally get confirmation of bridge opening and to pay for our transit Actually getting through the bridge is another matter; one has to listen on VHF Ch 12 from 2200 for a 20 minute warning that the bridge will open. This could be at any time from 2200 until the early hours depending upon when bridge control reckons there is slack water. At this point bridge control will announce who transits first, northbound or southbound traffic. Having determined this each vessel is called individually with permission to transit. We were called at 0230 and after waiting for 16 vessels to transit northbound transited the narrow opening in a strong adverse tide. Slack water my foot! 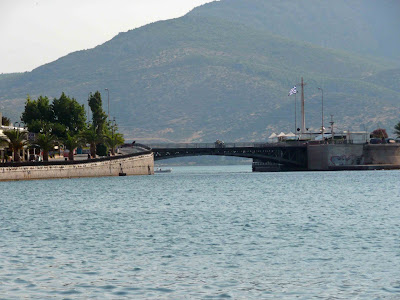 If it were not so annoying this would all have been highly amusing. The Port Police administration is typical of officialdom throughout Greece; overstaffed, ineffective, disorganised in the extreme and buried under mountains of unnecessary paperwork. It is no wonder that Greece finds itself in its present position with an inept Government and a flawed economy when the majority of its male population avidly follow the national pastimes of avoiding work and evading taxes. Oh, they do have one other; eating and drinking coffee which they do incessantly at any time day and night. 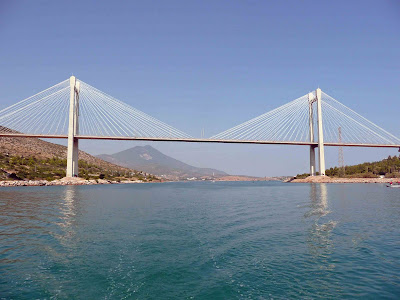 We had some good sailing in the Evvoikos Gulf however which at times turned out to be somewhat livelier than expected necessitating frequent putting in and shaking out reefs in mainsail and headsail in the strong gusty breezes.
Now on the more pleasurable part of this episode, the Saronic island of Aigina and Nea Epidauros on the north eastern coast of the Peloponnese. To reduce the journey time from the south of Evvoia to Aigina we called in at Porto Rafti on the mainland for a night in a pleasantly secure anchorage and then at the delightful, albeit windy, anchorage at Ormos Sounion further south. 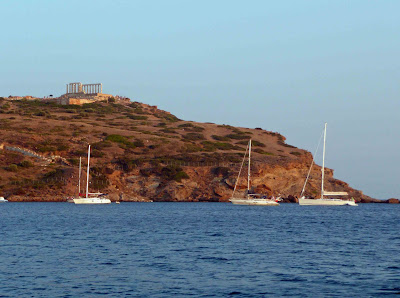 Overlooking the bay high on Cape Sounion stands the 444BC temple of Poseidon, god of the sea. Sixteen of its original thirty four slender Doric local white marble columns remain each cut with only 16 flutings instead of the usual 20 to reduce the surface area exposed to salt spray erosion. Byron carved his name on one of the columns and wrote this verse to capture his moments at Sounion:-
'Sunium's marble steep
Where nothing save the waves and I
May hear our mutual murmurs sweep' 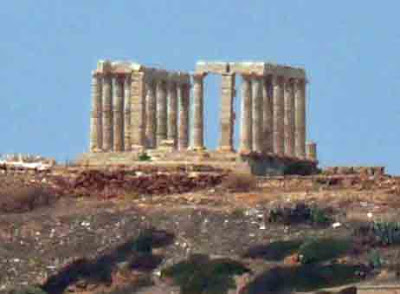 The Saronic island of Aigina, our next port of call, has been inhabited for 4000 years. In the 7th century BC the Island was the first place in Europe to mint its own silver coins which became accepted currency throughout the Greek speaking world. The accomplished seafarers of Aigina controlled most of the foreign trade in Greece thereby accumulating vast wealth and incurring the wrath of Athens, only some 12 miles distant, who finally conquered the Island in 456BC. The fortunes of the Island declined during Turkish and Venetian rule but its prominence was restored in 1828 when it was declared the capital of modern Greece. The realisation that an island is a pretty silly place to place a capital must have dawned quickly as Nafplio took over the mantle of supremacy in 1829 and then Athens in 1834! 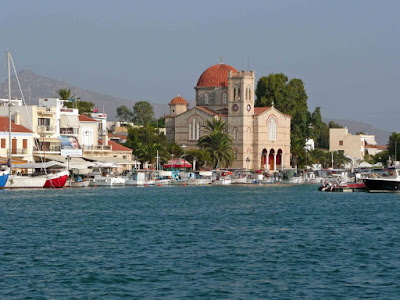 The port at Aigina town is picturesque but extremely busy with ferries, hydrofoils, a large fishing fleet and more yachts than it can accommodate. Fine Neo Classical mansions and the fish market on the waterfront and narrow streets make Aigina a charming town and the church of Agios Nektarios a short distance inland is said to be the second largest Orthodox Church after the Agia Sofia in Istanbul. The Island is a prolific source of the pistachio nut and those on sale everywhere in Aigina town are fresh and flavoursome.
A minor berthing disagreement with our neighbouring Greek yacht confirmed my opinion, not necessarily that of Miggy, that the majority of Greek men are arrogant, inconsiderate and unhelpful to the extent of being obstructive. There is, of course, the minority who are kind and helpful in the extreme and we have met them all; correction, I meant to say many of them!

There is apparently a negotiating procedure that goes on with Greeks to get past the word 'impossible' and continue the negotiation to a conclusion. Miggy has the patience and humility to be able to pursue this tradition but I have neither the time nor inclination to do so. I prefer straightforwardness. 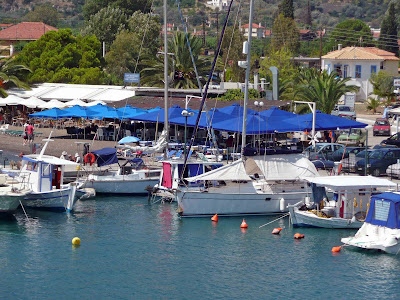 It was good to be back in Nea Epidauros again having stayed here during our Greek tour in November 2008. Then the newly completed harbour was empty of vessels and moorings but now is packed full. It is a popular place and no wonder considering the hamlet's position in a beautiful bay looking out to sea over the Methana peninsular and the islands of Kira and Aigina.
We berthed in the most unlikely place one could imagine managing to pick up laid mooring lines around our keel whilst taking Bella astern through the tortuous narrow passage between obstructions. With the help of Dimitri, the 'harbour master' and one of the 'minority', we managed to free ourselves and walk Bella back into her berth.

It is getting hot now with daytime temperatures reaching over 35°C in the shade. Whilst we have a windscoop and ample shades in the form of foredeck and boom awnings and a cockpit bimini with side flaps and various other bits of material, Miggy finds herself spending a lot of the day moving the covers around blot out the ever moving sun and take advantage of any breeze that may grace us with its presence. 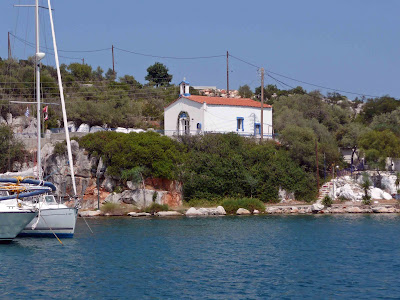 We have nearly come to the end of our Mediterranean adventure and we have, with great sadness, put Bella on the market. She has performed brilliantly and has done with grace everything we have asked of her. If anyone reading this blog hears of someone wishing to buy a superbly maintained and fully kitted out Sun Odyssey 35 please put them in contact with us on +447872226912 or miggyandneal@hotmail.co.uk Full details of Bella's specification can be found at www.apolloduck.com
Posted by Miggy and Neal at 16:56