The spring flowers had gone but the Ionian  Islands were as green and lush as they were when we left to go east in April 2009. No wonder because it rains a lot here. For most of the first and last weeks of September the rain and mist gave our anchorages a spectre more akin to a Scottish Loch than the Mediterranean in late summer. 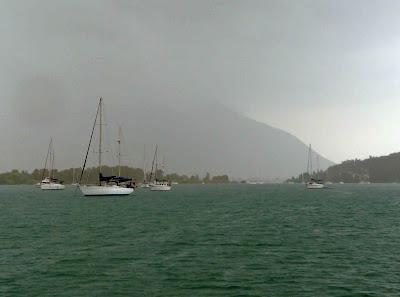 So wet and windy has it been that we feel the onset of winter and so we have sought the shelter and convenience, particularly that of constant electricity and water, of Lefkas marina where we have been delighted to meet up with old friends. 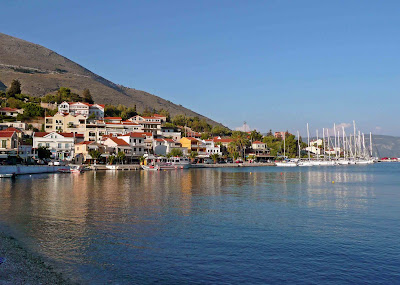 Whilst in the Ionian we have visited those places that we failed to see the last time we were here. Ay Euphemia, Cephalonia, is a pretty little place with a fairly well sheltered harbour but few other facilities for yachtsmen except the inevitable Tavernas. Even the Bank and its ATM have been closed. We endeavoured to hire a car to tour the Island but there was not a car available for a week!

We therefore caught a bus to the visit the capital of the Island, Argostoli, thereby seeing a little of the Island of Cephalonia on the journey. The Island is mountainous with its highest peak of 1600m. The valleys and lower slopes of the mountains are green with olives and the unique Cephalonian pine. Cephalonia was first inhabited in 50,000BC and has had a chequered history of occupation ever since but it is the Venetian influence that remains dominant not that many original buildings of that period or any other remain after the devastating earthquake of 1953. Argostoli has been reconstructed quite sympathetically however. Evidence of that earthquake abounds throughout the Island with abandoned villages and ruined buildings. 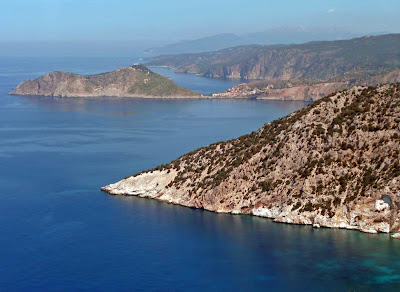 We were invited to the nearby village of Makriotika for the festival 'Gennisis tis Theotokou' marking the end of summer and the birth of the Virgin Mary, an important date in the Orthodox calendar. We eat souvlaki and drank local white wine, listened to live traditional Greek music and watched folk dancing by the local population. There is a hint of Russian, Jewish and even Irish in the dancing. At around 0100 we had had our fill of the evening's festivities and, being without transport, started to walk the 4km back to the boat but, thankfully, Miggy hitched a lift from the first car that passed. It was an enlightening and enjoyable evening. 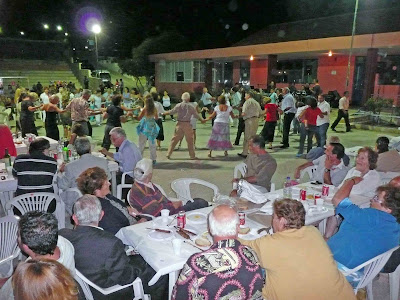 As is generally the case the wind arranged itself so that it was on the nose after every corner we turned on the way from Ay Euphemia to the village of Kioni on the east coast of Ithaca.  The entrance to the bay in which the harbour lies is marked by three old windmills on the southern headland. The bay itself nestles in the densely wooded slopes of pine, cypress and olive on which the whitewashed houses of the village are huddled. In twenty years the number of school kids fell from 600 to 20 as a large number of the inhabitants emigrated to America and Australia. Many of the houses, some of which are in ruin and others neglected, are still owned by these expats.  Summer holiday villas and apartments have sprung up on the hillsides to supplement the falling population but our guess is that the place goes to sleep in the winter with very few inhabitants remaining. Nonetheless this is probably the prettiest place that we have visited by sea in the Ionian.

The Islands of Kastos and Kalamos are charming but their harbours are, like the entire Ionian even in late September, filled to capacity not only with flotilla loads of charter boats but also with what I term the British Ionian Brigade, the Northern Division of which is prevalent. Members of this Brigade tend to keep their yachts in the Ionian and sail them from time to time in the summer months either following an established route between restaurants or hogging space on town quays and going nowhere!  Spring is the time to sail in the Ionian and, indeed, any of the popular areas in the Mediterranean, Adriatic or Aegean. 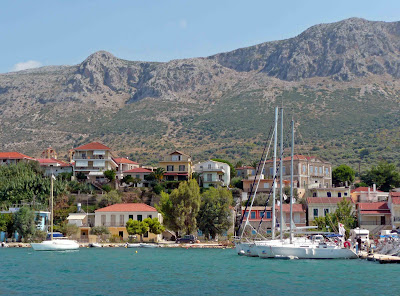 The town of Palairos on the mainland deserves a mention if only for the 'Taj' restaurant where one eats superb Indian curries with the Mediterranean water lapping at one's feet.
The sun has now set on the final day of our voyage of adventure during which we have sailed 8000 miles and visited 280 harbours and anchorages in eleven different countries.
Our enjoyment the last five years has been immense both on the water and ashore during the winter exploring the culture and history of our host nations and living with the people of those nations. 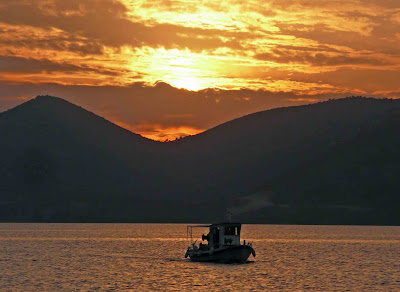 Our forays inland have taken us to diverse locations such as the white villages, the Alhambra and Seville in Andalucía, an oasis camp in the Sahara Desert, Venice, the ancient cities of Mycenae, Delphi, Delos and Olympia as well as the Pindos mountains and the rock top monasteries of Meteora in Greece and the strange and unique Cappadocia region in Turkey to name but a few. We have been fascinated by the wealth of history in the Mediterranean and have followed in the footsteps of Odysseus, St Paul, two St Johns and the Virgin Mary, the Crusaders, the Phoenicians, Alexander the Great and a host of Roman Emperors. 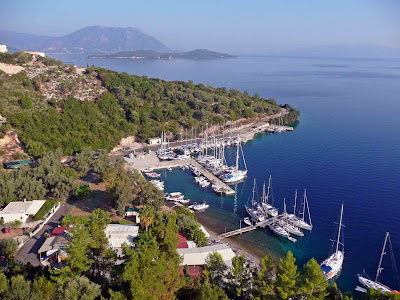 Many people have asked us 'why are we giving up'. We tell them that we have achieved what we set out to do during our five year project having seen and done all that we wish in the Mediterranean and that we are not giving up sailing, it being in our blood. We will miss Bella enormously and being without a yacht on Lymington River will be a strange feeling after so many years. 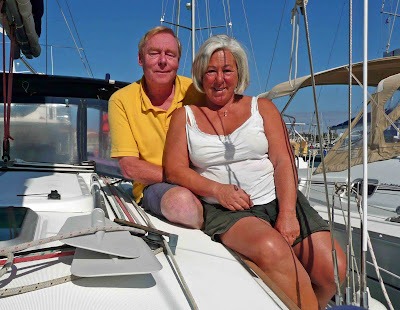 Miggy and I have bonded better than ever during our life in a shoebox, we understand each other more fully and have grown more tolerant of each other's shortcomings. Opinion as to whether or not we would live aboard for an extended period again be it in the Mediterranean or elsewhere is, I believe, divided between us. Life is short, however, and we are of like mind in wishing to see more of the world and to settle back in the UK once again amongst our family and friends. On this note we are looking forward with relish to spending Christmas and the New Year at home.
Posted by Miggy and Neal at 11:57

Good to receive another blog from you but it left me with goosepimples and a feeling of sadness as your journey comes to an end. What an achievement and what an experience though, how many other people actually do that of which they dream. Love to you both and hope the next phase of your 'retirement' proves as exhilarating as this one. xxxx

Hi, i read your blog from time to time and i own a similar one and
i was just curious if you get a lot of spam comments?

If so how do you prevent it, any plugin or anything you can suggest?

I get so much lately it's driving me mad so any help is very much appreciated.