Rather than face the dragons, storm and tempest that lurk off Capes Matapan and Tainaro in the southern extremities of the Peloponnese we continued our journey westward the way we had travelled east by way of the Corinth Canal. Having paid our dues we waited an hour or so for the westbound convoy to be summoned boat by boat to proceed to transit this 19th century feat of engineering. Two large Greek RIBs jumped the queue as is the custom in shops wherever these people are faced with others in front of them. We were astounded to discover that there is a word for queue in the Greek vocabulary! 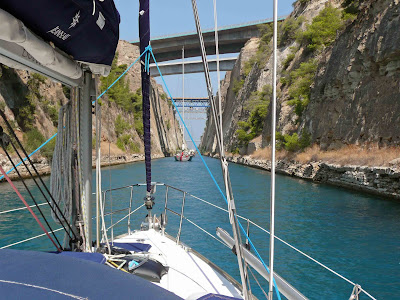 On our way through the Corinth Gulf we stopped at Galaxidhi and the island of Trizonia both of which were as delightful as we remembered when we last called in April 2009 albeit now crowded with tourists and yachts. Trizonia was Onassis's first choice of island to buy but, being unable to agree terms with the locals, had to settle for the island of Skorpio in the Ionian.
It was mid August and overbearingly hot with temperatures climbing to 38°C in the shade by mid afternoon. Whilst we have a windscoop and ample shades in the form of foredeck and boom awnings and a cockpit bimini with side flaps and various other bits of material, Miggy found herself spending a lot of the day moving the covers around to blot out the ever moving sun and to take advantage of any zephyr that graced us with its presence. To make matters worse temperatures below were such that we had to begin our slumbers in the cockpit until able to transfer to the forecabin in the early hours of the morning.

In Galaxidhi Andreas Grivas still stalks the quay selling fuel, water and electricity to unsuspecting yacht owners, the latter two commodities at the highly inflated price of 5€ each for 24 hours. This bully ordered everybody to pay with no grace whatsoever. We refused to do so until he asked us politely with at least a please in English or Greek and also to give us a receipt. The saga concluded with this man threatening to throw me into the water and indeed manhandling me with that intent. This was witnessed by Angelo, a superb ambassador for the town, who suggested we report the matter to the Port Police. This we did through a translator bought in for the ocassion over a period of four and a half hours; not that this worried us as we were in the  welcome cool of an airconditioned office. It transpired that they have a file on Grivas in respect of false accounting and the Captain of Police was grateful for our evidence to support their imminent action against the man. We were asked if we wished to press personal charges for assault but we declined wishing only to help the townsfolk be rid of this objectionable thief. 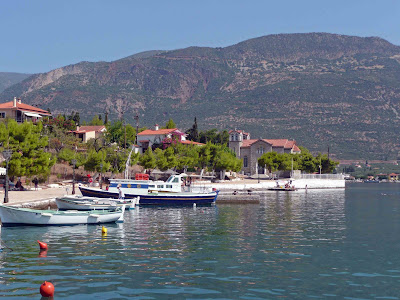 The moderate easterly breezes forecast for our sail from Trizonia to Messolonghi in the Patras Gulf turned out to be 25 knots shy on the quarter. Bella romped along at over 7 knots under poled out genoa and full main. Having passed under the magnificent Rion suspension bridge we did put a slab in the main and a roll in the genoa and it made no appreciable difference to Bella's speed. She loved every minute of it as did we. 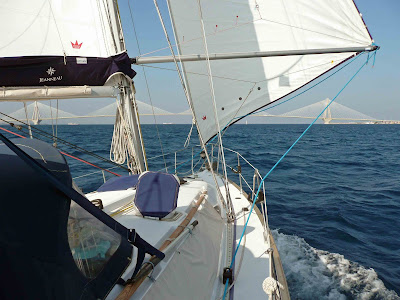 With the tide under us as well we arrived at Messolonghi, meaning 'amid the lagoons' a couple of hours sooner than we had expected. We sailed up the dredged canal past the Pelades or fishermen's houses standing on stilts in the shallow waters of the lagoon reminiscent of those we have seen in Thailand or Borneo. Sifting shellfish from the mud of the lagoon, particularly the golden-shelled fan mussel is however a diminishing livelihood and the majority of the former huts have been extended and upgraded as holiday homes.

We dropped anchor in the rather bland, but protected part of the lagoon that purports to be Messolonghi harbour but has little or no facilities for yachtsmen except a developing marina.  Two pontoons connected to the shore are in place complete with water and electricity and more are planned but yachts are generally berthed too close together. The marina office and a small shower block with washing machine have been built and a larger replacement building is nearing completion but is unlikely to be so completed for this winter. Let us hope for those who overwinter here that we are wrong. 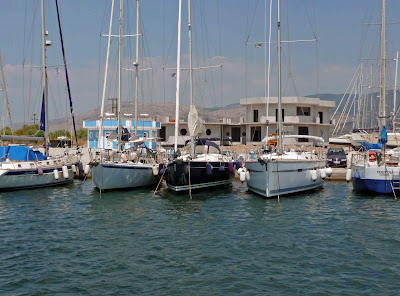 Modern concrete Messolonghi town has little to show to reflect its significant place in the history of modern Greece. In 1821 the town became the centre of resistance to the Turks during the War of Independence. Very few of the fine buildings that would have graced the streets when Lord Byron came to fight for the liberation of Greece in January 1824 remain and those that do lay in ruin. The poor chap had little time to fight for the cause in which he believed so strongly as he died of malarial fever just three months after his arrival in Messolonghi at the tender age of 36. He remains a hero of the town and underneath his statue in the Garden of Heroes is said to lie his heart. Two years later nine thousand Greek fighters battled their way through the year long Turkish blockade of the town; those left behind detonated explosives just as they were taken by the enemy. This self sacrifice led to the Turks surrendering Messolonghi in 1928 without firing a shot.

We sighted Messolonghi harbour's large and, we guess, old resident turtle and on the way out of the canal we were accompanied the resident dolphin. 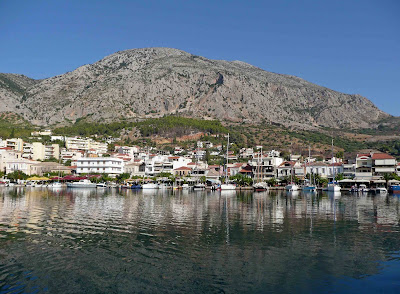 As we entered the Ionian Sea from the Gulf of Patras the wind turned to the west just as forecast and we had a delightful beam reach in no more than 15 knots up the mainland coast to Astakos. Byron stopped here, when the town was called Dragomestre, on his way to Messolonghi. We wonder if Byron experienced, as we did, the overpowering smell of sewage in the harbour. Although no raw stuff is visible there are vast shoals of grey mullet scooping back and forth on the surface of the water; a sure sign of very unpleasant things. Our previous visit to Astakos was in 2008 during our winter tour when these ghastly conditions were not evident. Old times' sake brought us here but we certainly won't be back again.

We are, however, back in the beautiful Ionian Islands and the great pleasure of meeting up with a number of old friends has relegated things not so good to the most distant part of our memory.